Click here to read more about the animals in the exclusion zone.
Transcript
James Beasley
Assistant Professor
University of Georgia

The main reason these animals seem to be persisting in high densities, or a high abundance within the exclusion zone is because of the absence of humans.

As you drive around the exclusion zone you’re overcome by all the lush nature, it’s really an eerie reminder of the tragic human impact that occurred there back around 30 years ago.

The Chernobyl exclusion zone is basically a 30 km radius that was created that extends around the nuclear reactor where the accident occurred, and within that 30 km zone that’s where preventative measures were taken to exclude people. All the towns, villages, cities within that 30 km area were evacuated.

Thirty years after the accident, these woodlands increased up to one-half or more times, so now approximately 70 percent of the area is forest.

If you talk about large mammals like carnivores and ungulates, it’s really good habitat because it’s wild territory now, and especially this very wild spot along the border with Belarus, and also many different water sources, like lakes and rivers and springs.

So the work we’ve been involved with in the Chernobyl exclusion zone has been to look at the distribution and relative abundance of wildlife, particularly large mammals and especially carnivores. Specifically looking at radiation contamination, so as you move from area of low to high contamination, do you see a subsequent droopy in the number of species that you detect, the relative abundance of those animals.

When we have human dominated landscapes we have lower densities of animals especially animals that come into conflict with humans like wolves and so after people were removed, even though the landscape was highly contaminated, it allowed them to increase.

What this research is not looking at is the individual health of those animals, so it doesn’t suggest that these animals are incredibly healthy, although on the surface they appear very healthy. It doesn’t imply that there aren’t more subtle genetic effects, and that’s another important area that I think we need to continue to explore with future research down the road.
X

Click here to read more about the animals in the exclusion zone. 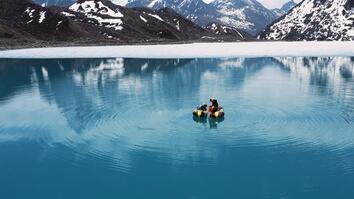