Learn how to save the world's Big Cats.
Transcript
“This is all being done at night, pitch black, there are no lights.”

“You see the cars that are driving into the temple and the staff workers that are helping the wildlife traders.”

“They said they would take the tigers to their farm and make the switch.”

SHARON GUYNUP, NG NEWS: Our sources tell us they were supposed to take unregistered tigers¬–like they had before.

SHARON GUYNUP, NG NEWS: But instead investigators believe they took these three tigers. Tigers with names, and a paper trail.

SHARON GUYNUP, NG NEWS: A year later, national geographic traveled there to investigate what happened that night. The temple presents itself as a sanctuary where monks live in harmony with 147 tigers. It’s also a popular tourist destination that brings in an estimated $3 million dollars year. For years, conservationists and the media have reported abuse and exploitation of these animals.

SHARON GUYNUP, NG NEWS: But we obtained exclusive evidence from the conservation group Cee4life which Cee4Life says shows that this Buddhist monastery is trafficking tigers into the illegal international wildlife trade—meaning that the tiger you took a selfie with one day, could end up dead and smuggled across the border the next.

CHARLIE” LONG-TERM ADVISER TO THE TIGER TEMPLE:
“I have the evidence to show the world. I have CCTV.”

SHARON GUYNUP, NG NEWS: “Charlie” has been a long-term advisor to the temple. We’re not showing his face to protect his identity.

SHARON GUYNUP, NG NEWS: Charlie told us that the traffickers would have needed to get through six locked gates to get to the tigers–and that a senior staff member named Kasaem holds the keys.

CHARLIE” TRANSLATED: Who ordered you to open the door and the gate of the tiger temple?

“CHARLIE” TRANSLATED: He ordered it.

SHARON GUYNUP, NG NEWS: The abbot who Kasaem has just implicated is the founder and spiritual leader of the tiger temple.

Abbot (from recording): Yes, yes, that is our policy. Otherwise they [the traffickers] would have to take live tigers out.

SHARON GUYNUP, NG NEWS: The abbot speaks of a policy of killing tigers before they are trafficked.

“Unfortunately there were tigers that were, for the lack of a better term, poached. They’re dead. They were killed. It was an inside job unfortunately."

SHARON GUYNUP, NG NEWS: At the temple, we tried to speak to the abbot, but were given his secretary instead. We asked what happened to the three missing tigers.

JAKKRIT APISUTHIPANGSAKUL, SECRETARY TO THE ABBOT:
"This still don’t prove that these [tigers] already disappear. We have completely 147 tigers. This mean no disappear.”

SHARON GUYNUP, NG NEWS: In February 2015, the Tiger Temple’s veterinarian presented evidence to the authorities that he says shows that the three tigers had disappeared in December. He handed over microchips that had been cut out of the tigers.

Veterinarian (from recording): The matter is connected to me directly. I was the one who certified the registrations. These three were registered.


SYBELLE FOXCROFT, FOUNDER AND DIRECTOR, CEE4LIFE:
“One of the points that came out in this investigation regarding the three missing tigers was that a mistake had been made. The tigers that were taken were microchipped and recorded by the DNP, and they were not supposed to be taken. It was a mistake.”


SHARON GUYNUP, NG NEWS: With that evidence in hand, officials from the department of national parks went to the temple in April 2015 and confirmed that the three tigers were indeed gone.

SHARON GUYNUP, NG NEWS: National Geographic gathered additional evidence suggesting that tigers have been disappearing for at least a decade.

Voice of ASH WALDRON, FORMER TIGER TEMPLE STAFFER:
"Basically I was doing my rounds and then found that there was cubs born in a couple of the cages where the female tigers were to be. And then the next morning they’d say, “No there’s no tigers.” And I’d say, “Well I saw the tigers with my own eyes, I saw them being born, so what’s that all about?” They quietly said to me that they’re going to a tiger farm in Laos.

Voice of SYLWIA DOMARADZKA, FORMER TIGER TEMPLE VOLUNTEER:
It seems to me that what the monks were doing was getting rid of some of the tigers and bringing in replacements for those tigers, and renaming them with the names of the tigers that disappeared in order to cover up the fact that they were gone.

SHARON GUYNUP, NG NEWS: Despite allegations of trafficking for many years, no one has ever been accused or prosecuted. Now, with new evidence from Cee4life, the federal Royal Thai Police says it will soon begin an in-depth investigation into alleged wildlife trafficking and possible money laundering.

J.A. MILLS, WILDLIFE TRADE EXPERT AND AUTHOR, BLOOD OF THE TIGER:
"This is not just about a single Buddhist temple in Thailand, this is about the fate of wild tigers. There are nearly one thousand captive tigers in Thailand. Not just in the Tiger Temple but also in entertainment parks, wildlife farms and other facilities in Thailand. These places are leaking live tigers, tiger meat, tiger skin, [and] tiger bones into the illegal international trade. That leads to the poaching of the world’s last 3200 wild tigers. And its run by the same organized criminals that traffic in guns, in drugs and in women and children."

Tiger Temple Guide SOT: “If you want a photo, follow me!”

SHARON GUYNUP, NG NEWS: The future of the Tiger Temple is uncertain. The government plans to remove the tigers soon, but meanwhile the temple is moving forward with nearly a $170 million dollar World Buddhist Sanctuary complex.

SHARON GUYNUP, NG NEWS: The Tiger Temple Foundation has also applied for a zoo license. Critics contend that, if approved, the sanctuary will have greater autonomy over its tiger operations.

“CHARLIE” LONG-TERM ADVISER TO THE TIGER TEMPLE:
“I want the people of the world to know this trade is illegal. Tiger is like the rare animal now. They cannot do anything. If we don’t help them, it’s not safe for them.”

Learn how to save the world's Big Cats. 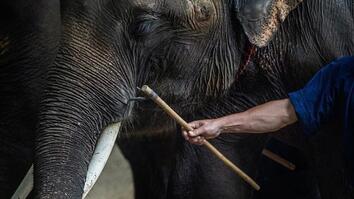 Inside the dark world of captive wildlife tourism 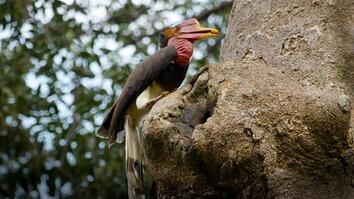 The Helmeted Hornbill's Nesting Habits Might Cause Its Demise 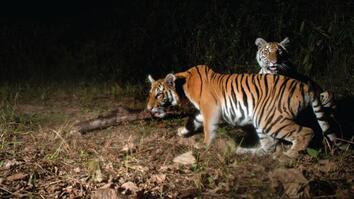