Learn more about olive ridley sea turtles.
Transcript
Voiceover: This is a story of two species on the beaches of Mexico fighting to survive. These endangered Olive Ridley turtles, and the impoverished humans who hunt and sell their eggs.

Poacher (Spanish): There is no work. If there were jobs, why the hell would I come out here? I am a brick-layer, but I can’t find a job. What choice do we have? What will we eat? What will our children eat?

Voiceover: Turtle eggs have been a part of local culture for centuries, but taking and selling them was outlawed in 1990 and it’s now a federal crime punishable with up to 9 years in prison, depriving people of one of the few sources of income they had. But when it comes to putting food on the table, even the law won’t stop them.

Miguel (Spanish): Eating turtle eggs is like a tradition here. If you come to the village and don’t eat turtle eggs, it’s like you were never here.

Voiceover: This is Miguel. He’s from a village on the beach. And like many people here, he started poaching eggs when he was a young boy.

Miguel (Spanish): Many people go hunting for eggs. They do it out of necessity, not because they want to. Everybody knows it’s a crime, but they don’t see it as a crime.

Voiceover: The turtles lay 50 to 100 eggs at a time. They bury them in small nests before returning to the ocean. The humans use a stick to find the hollow ground and locate the nests.

We spent hours travelling around different villages, going from house to house talking to poachers Miguel knows. It felt like everybody around here hunted eggs, even women and children. We hoped to film people at home to show how they lived, but because egg hunting is a federal crime, nobody wanted to talk on camera.

During the peak landing periods, when thousands of turtles arrive, marines and environmental inspectors are sent in to protect the beach from poachers. It makes it much harder for the poachers to go out, but many still take the risk.

This year, they even started using surveillance drones.

(All dialogue in Spanish)

John Dickie, Reporter: Could you explain what the drone is for?

Hector Perez, Inspector: On the screen, you can see a trail. It’s not visible from here because of the dunes.

John: Who are you looking for on those trails?

Hector: It could be local people just passing by, or it could be egg poachers. We can’t be sure so we have to monitor them.

John: Does it have infra-red capability?

Hector: No, not infra-red.

Inspector 2: Not at this time.

John: Because the turtles arrive at night and the poaching is at night.

Hector: Not all the poaching is at night. It continues in the day. At night they carry out patrols and in the day we monitor the trails.

Miguel (Spanish): I stopped going to the beach for eggs, because I almost got caught. I got shot. Fear makes you stop. You think about your family. Your wife says she is scared to lose you. Who will look after the kids? It makes you think.

Voiceover: But while all these security measures are taken on the beach, the turtle eggs are openly sold in local markets.

John Dickie, Reporter: So we’re in the market in Juchitán. It’s crazy, there are turtle eggs for sale everywhere, even though it’s completely illegal and it’s actually a federal crime. I’ve heard of journalists getting their cameras smashed here so I’m just acting like a tourist and filming on a cell phone.”

What I can’t believe is that they send in the marines and do such a show at the beach so people don’t take the eggs and then completely allow the sale of the eggs in the market and the authorities don’t seem to be doing anything about it. So there’s definitely double standards going on.

Voiceover: I asked the district attorney for environmental protection how this was possible.

Nereo Garcia, District Attorney for Environmental Protection (Spanish): Juchitán market is the biggest problem we face in the state. We have to be very strategic about it. We can't just go into the market and set off a social conflict there. Local authorities are scared of creating a cultural conflict, so it’s a social and political issue.

Voiceover: The feeling around here is that egg poaching will only stop if the government provides alternatives.

Miguel: Instead of sending soldiers, why doesn’t the government create jobs for us? We could look after our fauna. Like collecting eggs and moving them so the baby turtles can hatch. There could be many jobs programs, instead of wasting money on stupid ****.

Voiceover: Back in Juchitán, we went for lunch at a local, family-run restaurant. Like many places here, turtle eggs are even listed on the menu. Everybody in Juchitán knew the eggs were illegal but few seemed to know about the turtles being in danger of extinction.

Woman: These are the finest turtle eggs. I don’t know why it’s illegal. I think it’s because they are bad for you. They are high in cholesterol. I guess that’s why they’re illegal. But it’s a tradition here in Juchitán.

Voiceover: The struggle between the two species continues, with each side fighting for its offspring. While their numbers decline worldwide, the turtles will continue arriving to the beach to lay their eggs, and until other opportunities present themselves, the humans will continue to steal them to put food on the table for their families. 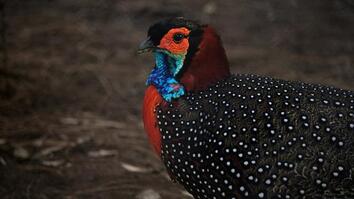 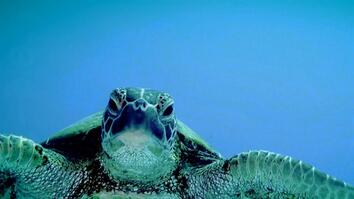 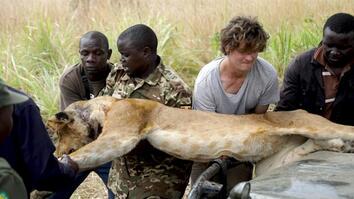 Watch a lion fall from a tree during rescue from a wire snare injury
Baby sea turtles risk it all in treacherous scramble to the sea
How nesting Olive Ridley sea turtles influence jaguar behavior
The Helmeted Hornbill's Nesting Habits Might Cause Its Demise
How Mass Die-Offs and Poaching Threaten Rare Asian Antelopes
Inside the Lives of Butterfly Traders
Rare Baby Sun Bear Born to Rescued Parents
Why Are Wild Parrots Disappearing in Miami?
See What It Takes to Hide a Secret Tracker in a Rhino Horn
How Infrared Technology Could Help Fight Wildlife Poaching
Black Market Demand for 'Red Ivory' Is Dooming This Rare Bird
Nearly 150,000 Orangutans Lost to Logging, Palm Oil, and Human Conflict
What's Driving Tigers Toward Extinction?
Meet the Heroes Who Protect the Last Northern White Rhinos in the World
Baby Rhino Picks Fight With Car, Changes Mind
Watch: North Korea Diplomats Accused of Smuggling Ivory and Rhino Horn
Elephants Don't Recognize Borders, Which May Put Them at Risk
Elephant Poaching Forces This Community to Take Sides
Dian Fossey's Life with Gorillas Revealed in Rarely Seen Film
How I Got Arrested Working to Save Elephants
How Nuclear Bombs are Helping Fight Elephant Poachers
One of the Last Big Tusker Elephants Was Killed by Poachers
The Ghillie Suit is a Great Disguise—But Where Did It Come From?
Sloth Bear Cub Rescued After Mother Electrocuted
Ride Along With a Team of Lion Protectors
Baby Elephant Walks Again After Being Shot in the Legs
Inside the Struggle to Save an Endangered Grouper Species
The Tragic Tale of a Pangolin, the World’s Most Trafficked Animal
Bringing China and Africa Together to Save Elephants
Could Safely Removing This Rhino’s Horn Save Its Life?
Is It OK to Trade in Rhino Horn?
These Rare Giraffes Were Killed Just for Their Tails
Young Orphaned Gorillas: See Their Adorable Bond With Park Rangers
Protecting the Sun Bears of Borneo
Largest Ever Ivory Burn Destroys 105 Tons
Meet Six Rescued Rhinos That Survived Poaching
Protecting the Siberian Tiger's Last Home
Bloodwood: Rosewood Trafficking Is Destroying This National Park
Infiltrating the Illegal Wildlife Trade: The Human Cost
Can Fake Furs Help Protect Leopards?
Meet the Dog Trained to Take Down Poachers
EXCLUSIVE: Confronting an Accused Ivory Smuggler
Ivory’s Historical Connection to the Slave Trade
Diversion Helps Drone Spy on Suspected Ivory Trafficking
Why Elephants May Go Extinct in Your Lifetime
Exploration Category:
Show More Videos
National Geographic
© 1996-2015 National Geographic Society.
© 2015-2020 National Geographic Partners, LLC.
All rights reserved.