It’s a desert out here in Southern California and expecting every homeowner to have lush green lawns isn’t exactly realistic anymore.

They’re doing my rental house today across the street which is a big yard and they are doing the front and the back which is going to save me a lot of water.

Turf Terminators launched last summer so we’ve been going at it for about ten months and we’ve grown from, you know, 3 employees to 500. We realized that turf removal rebates that are available for the replacement of turf grass were rising in value so we put two and two together and figured out that we can run a business doing drought tolerant landscaping here. We’ve got a variety of drought tolerant vegetation. Primarily here we are going to be installing some lavender shrubs, we have kangaroo paw in the back, and also tea tree here. So, it’s a good variety. You get a lot of color in these yards, but none of these require much maintenance and certainly not a lot of water.

Green grass is, you know, a staple of American life. It’s been amazing to see so many people willing to stand up and sort of take action. It’s all part of a transformation of California’s relationship with water, I think. When we actually, perform services in a neighborhood, about 3.5 neighbors make the transition as well. Mr. Smith has ten of his neighbors who have already signed up with us.

I’ve been living here 48 years. No one in this area haven’t been living here less than 25 or 30 years. I know all of my neighbors on this block and quite a few of them all around the area. Majority of the people over here are senior people and they are retired and on a fixed income.

This is absolutely free. If you think about the amount of water that you’re saving …

Fixed income man, I tell you. And with this program, I think I can live with that. I’ll be Hopalong Cassady on that one. [laughs]

Yes, I was the first lawn on the block to change from grass. My neighbor, Mr. Smith, he was the one who introduced me to it. I just finished this last week.

My grandkids, my dog, and myself love the astroturf. My water bill is half of what it used to be since I had the astroturf. A lot of people think that just, somebody is just talking about a water shortage, I can do all I want with my water. But, it’s a real threat of us running out of water. As the water bill gets higher, a lot of people will think I should have done this and then if it becomes mandatory then they are going to wish they had got it done beforehand. It’s almost like Las Vegas, you go to Las Vegas, just about everybody has this type of lawn. 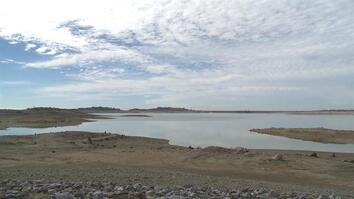 Dancing the Spirit Back Into Parched Rivers
Hope for Rivers During Drought
Droughts 101
Ken Burns on the Dust Bowl
NG Live!: Jason Clay: The Power of Connection
Finding Out How Much Water Is in the West
California Drought Spurs Drilling Boom
Food by the Numbers: Feeding Our Hungry Planet
Is California Exporting Tons of Water During a Drought?
Meet the Victims of Colombia’s Worst Drought in Decades
Meet Warriors on a Mission to Help Lions and Humans Coexist
What’s It Like to Live in a Town Without Water?
How Water Built and Destroyed This Powerful Empire
The Lake That Slowly Vanished
One of Earth’s Driest Places Experiences Rare Flower Boom
Town Drowned By Dam Returns From the Dead
What Happens When Cape Town Runs Out of Water?
Green Car
Most Earth-Friendly Home Ever Built?
Tiny Houses: A Full Life on a Smaller Scale
Can You Build a House With Hemp?
Earthships: A House Made From Beer Cans Sparks a Movement
TIL: Cairo’s “Garbage People” Farm Their City's Trash
7 Smart Cities Around the World
How to Cleanse Your Beauty Regime of Microplastic
Gyre: Creating Art From a Plastic Ocean
The Mighty River That Dried Up: "I Am Red"
"I Am Red": Behind the Scenes With Filmmaker Pete McBride
Buried Stream Sees the Light of Day
Photographing our Seas: Marine Birds and Conservation
Photographing our Seas: Sharks After Dark
One Man’s Journey to Save the Ocean
Saving Orangutans in Sumatra's Disappearing Rain Forests
Epic Grand Canyon Hike: A 750-Mile Challenge (Part 1)
Epic Grand Canyon Hike: Frozen Shoes and Low on Food (Part 2)
Epic Grand Canyon Hike: Thirst and Threats in the Godscape (Part 3)
Our Ocean Can Rebuild Itself and We Can Help
Photographing a Mythical Shark Shepherd: The Story Behind the Shot
In a Land of Plenty, Faith and Farming Unite This Community
Trekking Through One of Africa's Most Majestic Places
What Will Happen If the Rivers Disappear?
Saving One of the Most Pristine Wetlands on Earth
How Cape Town's Residents Are Surviving the Water Crisis—For Now
Plastics 101
Discover How Conservation is Being Redefined in Gorongosa National Park
This sacred golden fish thrives in Bhutan
Natural Disaster Category:
Show More Videos
National Geographic
© 1996-2015 National Geographic Society.
© 2015-2020 National Geographic Partners, LLC.
All rights reserved.