Transcript
Voice of JOHN HUGHES, WILDLIFE BIOLOGIST, US FISH AND WILDLIFE SERVICE NATIONAL BLACK-FOOTED FERRET CONSERVATION CENTER:
For a carnivore like black-footed ferrets, because we rely so heavily on captive-rearing and we’ve had the animals in captivity for so many generations, we do run the risk of inadvertently domesticating the animal.  So preconditioning is a big part of that.  You know instilling those wild behaviors.


KIMBERLY FRASER, EDUCATION SPECIALIST, US FISH AND WILDLIFE SERVICE NATIONAL BLACK-FOOTED FERRET CONSERVATION CENTER:
Here was a species that had been initially listed on the endangered species list, declared extinct.  Its significance is that it is part of an ecosystem that is highly underrepresented in the world.

Out here on the Great Plains we know that where its habitat—where it lives—there’s other species like prairie dogs.  And, you know the ferret is obligated to the prairie dog.


JOHN HUGHES, WILDLIFE BIOLOGIST, US FISH AND WILDLIFE SERVICE NATIONAL BLACK-FOOTED FERRET CONSERVATION CENTER:
Prairie dogs constitute anywhere from 65 to 90 percent of their prey. And you really need to imprint on them on that prey species if you want them to succeed.  We precondition the animals for a 30-day period. Ideally they kill four prairie dogs during that time.

What a ferret tries to do is get a prairie dog around the neck and crush its windpipe and asphyxiate the animal. Many times the first prairie dog that’s introduced, you know, they are actually quite intimidated by it.  And a prairie dog is a pretty formidable piece of prey.  We’ve had ferrets injured during the process.  We’ve actually had ferrets killed by prairie dogs in the preconditioning pens. And it’s a tough thing, you know, for a ferret to kill.

It’s almost like a whirling dervish or something but you’ll see a ferret just kind of roll around with a prairie dog, trying to get the upper hand and get it’s jaws around its neck.  And once it become incapacitated they’ll drag it down a burrow.


JOHN HUGHES on video:  “You don’t want to be hand-feeding them, I guess.  But you want some pursuit and there needs to be a kill in the burrow.  And you can hear  what’s going on right now.  Which is good.  It’s gruesome but good from our standpoint.  But ideally, the animal will go into the burrow, there will be a pursuit in the burrow and then the ferret kill it in the burrow itself.


JOSH ROTH, BIOLOGICAL SCIENCE TECHNICIAN, US FISH AND WILDLIFE SERVICE NATIONAL BLACK-FOOTED FERRET CONSERVATION CENTER:
We prefer to feed it prairie dogs to them beforehand just so that they get used to the taste of exactly what their eating.  However, prairie dogs something that are just readily available.  So we supplement with rat because it’s basically the closest thing that we can get that’s easily purchased.

This is their natural state—killing an animal and eating the animal.  That’s what they have to do in the wild to survive.


JOHN HUGHES, WILDLIFE BIOLOGIST, US FISH AND WILDLIFE SERVICE NATIONAL BLACK-FOOTED FERRET CONSERVATION CENTER:
When they’re finished with the preconditioning process at thirty days we trap them up, bring them  into a holding facility and that’s their last stop before they are released at one of our reintroduction sites.

It’s a bit of a leap of faith for us because our animal caretakers, as you might imagine, get quite attached to these animals.  They have a lot invested in them.  They see them from the day they’re born till the day they go out the door. We need to accept some losses and we need to try and equip them as best we’re able to survive out in the wild. And for ferrets, at the preconditioning has been the key to that.  So, for the folks that work here it’s kind of a case of letting go and just hoping you see them again the next year. 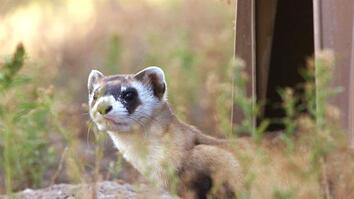 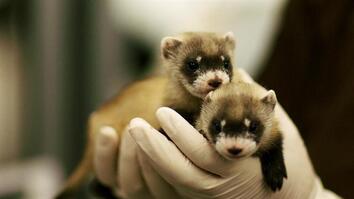 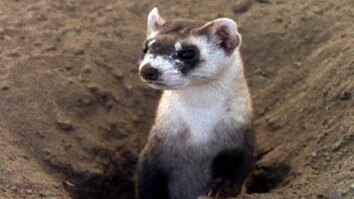