VIDEO: Why Use 3-D Printed Drones?
Transcript
Scott “LB” Williams, Director General, Reserve Protection Agency
It’s a war zone at this point. The value of a rhino horn is worth more than 10 times the value of the rhino alive. Poachers are coming in. They’re well armed. Most of them are coming in in teams now and they come in with assault rifles. And they don’t have the law holding them back.

Aliyah Pandolfi, founder, Wildlife Conservation UAV Challenge
There’s not a lot of technology solutions or barriers for the poachers. So our goal really is focusing on stopping it before it actually happens. The Wildlife Conservation UAV Challenge is a challenge that is created to motivate and inspire people from around the world to create an unmanned aerial vehicle that would be used for counter-poaching purposes. It’s 137 teams in 29 different countries on 6 continents saying “Yes, we want to be a part of this initiative, we want to help find a solution.”

Scott “LB” Williams
The idea behind using a drone for counter-poaching is to get out there and try to detect the poachers before they get to the animals. With a UAV you can actually cover half a days worth of walking within a matter of minutes.

Aliyah Pandolfi
It’s not about making a great aircraft it’s about being able to process that data on board. And that’s where the new sensors and the little tiny computers and the chips become exciting. If there are poachers in the park, how many are there? Where are they located? What types of weapons are they carrying? What’s their proximity to the animals? And also what’s the best route for a ranger to go there and stop the poachers.

Michael Balazs, Team Rhinoshield
By being involved in this challenge we’re hoping to push this technology to the limit. 3D printing allows us to design platforms that are very quick and easy to produce. And the great thing about using a smartphone is that it has a number of built-in sensors already: Bluetooth, Wi-Fi, has LTE communications, but the thing that we leverage the most is the camera and the processing power. Where we are now is we’ve developed a 3D printed plane, we’ve developed the apps that run on the phone and we’ve got the sensors that we want to put on the system. All that remains at this point is put it all together, put it up in the air and make sure that it does what we hope it does.

Aliyah Pandolfi
From the perspective of why we started the challenge I’d like to see the rhino poaching numbers go down drastically. And then from the point of technology we really hope that people are going to start seeing that a challenge can be a great way of motivating people. If we have technology we can use it to protect the world we live in

VIDEO: Why Use 3-D Printed Drones? 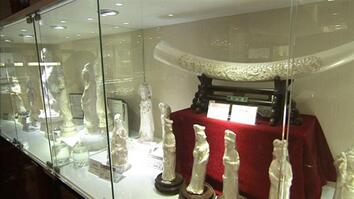 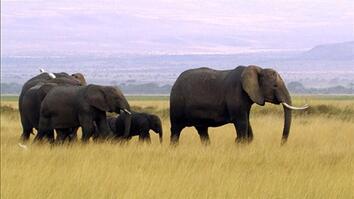 Battle for the Elephants: Preview
Battle for the Elephants Episode 4: Massive Ivory Stockpile
Battle for the Elephants Episode 2: Criminal Traders Exposed
Battle for the Elephants Episode 1: The Plight of the Elephant
Asher Jay: Art of the Matter
Watch: Illegal Elephant Ivory Crushed in Times Square
Why Elephants May Go Extinct in Your Lifetime
Diversion Helps Drone Spy on Suspected Ivory Trafficking
Ivory’s Historical Connection to the Slave Trade
EXCLUSIVE: Confronting an Accused Ivory Smuggler
Infiltrating the Illegal Wildlife Trade: The Human Cost
Largest Ever Ivory Burn Destroys 105 Tons
Bringing China and Africa Together to Save Elephants
One of the Last Big Tusker Elephants Was Killed by Poachers
How Nuclear Bombs are Helping Fight Elephant Poachers
How I Got Arrested Working to Save Elephants
Elephants Don't Recognize Borders, Which May Put Them at Risk
Elephant Poaching Forces This Community to Take Sides
Watch: North Korea Diplomats Accused of Smuggling Ivory and Rhino Horn
Black Market Demand for 'Red Ivory' Is Dooming This Rare Bird
The Helmeted Hornbill's Nesting Habits Might Cause Its Demise
Baby Gorilla Rescue
Price of Poaching
Battling India's Illegal Tiger Trade
Juliana Machado Ferreira: The Stolen Birds of Brazil
Fighting Rhino Poaching With Guns, Drones, and Dogs
Mountain Gorillas' Survival: Dian Fossey’s Legacy Lives On
Meet Russia's Tiger Guardians
Meet the Dog Trained to Take Down Poachers
Can Fake Furs Help Protect Leopards?
Stealing Turtle Eggs Got People Shot, But The Thievery Continues
Protecting the Siberian Tiger's Last Home
Meet Six Rescued Rhinos That Survived Poaching
Protecting the Sun Bears of Borneo
Young Orphaned Gorillas: See Their Adorable Bond With Park Rangers
These Rare Giraffes Were Killed Just for Their Tails
Is It OK to Trade in Rhino Horn?
Could Safely Removing This Rhino’s Horn Save Its Life?
The Tragic Tale of a Pangolin, the World’s Most Trafficked Animal
Inside the Struggle to Save an Endangered Grouper Species
Baby Elephant Walks Again After Being Shot in the Legs
Ride Along With a Team of Lion Protectors
Sloth Bear Cub Rescued After Mother Electrocuted
The Ghillie Suit is a Great Disguise—But Where Did It Come From?
Dian Fossey's Life with Gorillas Revealed in Rarely Seen Film
Nat Geo Exclusives Category:
Show More Videos
National Geographic
© 1996-2015 National Geographic Society.
© 2015-2020 National Geographic Partners, LLC.
All rights reserved.