Sloths are the number one rescue in our program, mainly because they're very slow.

My name is Néstor Correa and this is my wife, Yiscel Yángüez. Together we run APPC Wildlife Rescue in Panama, and we specialize in rescuing sloths.

There's different reasons we receive or we rescue sloths. One case is construction projects when they're eliminating the forest and they are left behind. Then that also happens when they are also eliminating an area and they just move to the backyard of a person or when they are trying to actually change from one tree to another and they have a big highway or road in the middle.

That's with the adults. When we do that, we just rescue and relocate them into the wild.

Sloths are slow, but when they have to protect themselves they go aggressive and they can be fast, so you have to be very careful, those claws can open your skin real fast. And if they can grab you they're not going to let you go, and if they bite you it's the same thing.

Being right in the middle of the road like that had to be horrible. Just to go from one side of the road for them is like an eternity.

When they get stressed they lose weight, they get weak. So the best thing to do is just 24, 48 hours later, let them go.

All our babies are orphaned. We assume that in some cases, and in other cases we know they're orphans. Why? Because every single one we found was either with a mother that was dead or about to die, or motherless.

I've been working in wildlife rescue my whole life, and I meet a lot of people who can take care of animals, even baby animals. But I never meet a person that can take care of sloth babies like Yiscel because of the patience she has. Especially when they have to eat every two or three hours, very, very small amounts of milk and she has so much patience. And she can wait and stay with them. I think she's actually becoming a sloth.

Right now she looks after eight at the same time. She actually dedicate the whole day and night to them. From like 6am to 11pm, they like any human baby, they need 24-hour care.

All the animals that we have were rescue animals. Every single one. So it's very important to understand that we work in wildlife and the animals are not pets. Once the animals are ready to go back to the wild the will.

Today is a very exciting day for us because we're going to release Punky. We found him close to the road, he was by himself, he was about two or three months old, and the mother was actually hit by a car. And now is a very good time for us to release him because he's been trying to escape for the past few weeks actually. And he's already trying to look for other trees so I think he's ready to go.

Every time he attempts to escape he's getting more and more depressed, so we're going to fake an escape so he thinks he's escaping, and he's just going to be free.

Ya, this is a very, how do you say, sentimental moment for us. But we're happy, we're not sad, we're happy. These are happy tears, not sad. 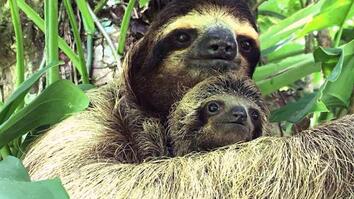 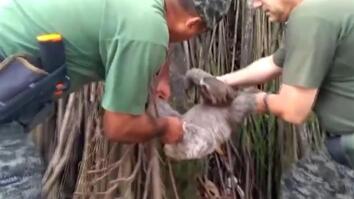 Sloth Saved from Train Track and Released to Brazilian Rainforest 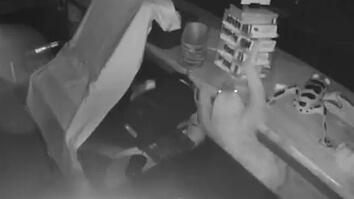