June 12, 2014 - Layka, the U.S. military combat dog on the cover of National Geographic's June issue, parachuted with her handler recently to help her fellow combat dogs. While serving in Afghanistan, Layka was shot four times by the enemy. Despite the injuries, she attacked and subdued the shooter, saving her handler and other members of the team. In surgery to save her life, she lost a front leg, and her handler, Staff Sgt. Julian McDonald, later adopted her. Here, with McDonald, and tandem sky jumper Mike Elliott, Layka took part in testing a parachute harness that could make it easier and safer for dogs to help soldiers reach remote locations.

See Layka and Julian's story in this video.

Some people in the special operations community approached us about making a vest that can be used for everything up to attacking detection, and up to fast roping and free-fall. We've been working on this dog vest for the past three years now. We had already tested the harness and we had heard about Julian and his dog and had spoken to him. He said he would really like this opportunity so we got them up here and went through with the jump.

Mike Elliott
President, All Veteran Group
Jumped In Tandem With Layka and Julian

Once the aircraft came up, the three of us walked out towards the aircraft, and Layka was very, very calm. I was really surprised on how calm she was. We put the equipment on, checked everything numerous times to make sure the harness was fitted properly, to make sure it was fitted on Layka properly, and very comfortable.

I just kind of watched her, stayed, you know, close to her, kept a hand on her, along with the handler just to keep her calm as we climbed to altitude. You have pressure changes, et cetera et cetera, so we were monitoring what the dog was doing and was making sure she was staying as comfortable and as relaxed as possible.

And once this is done we were close to our exit altitude which is around 13,500 feet. She did get a little nervous once the door opened up, but we all do, as well as humans who are about to jump out of an aircraft for the first time. So nothing out of the ordinary. Once we saw that she was a little nervous we just kept hands on her, rubbing her, and saying "It's OK." As we started to move towards the door we didn't try to get her all the way out into the relative wind, so we stayed back from the door somewhat and went through the exit procedures.

One of the things that went into this vest is making sure that everything the vest is constructed with is actually the same thing that military parachute systems are made with. The main frame of the harness of made out of type eight nylon, with a 4,000lb tensile strength, and then we also have a military-grade mesh to allow the dogs more breathability so they can have airflow into the vest.

Layka I think weighed about 70lbs, so even in free fall with opening shock there's no way she's gonna come through that 4,000lb breaking strength. So I knew she was completely safe. Her handler had said she's a little high-strung and she's young. Everyone's nervous on their first jump but she handled it very well.

It's an honor to work with these guys and the special operations community, some of these dogs have actually saved my husband's life and the lives of our friends so it's just been a really good experience working with them and trying to make a product that can help save them.

June 12, 2014 - Layka, the U.S. military combat dog on the cover of National Geographic's June issue, parachuted with her handler recently to help her fellow combat dogs. While serving in Afghanistan, Layka was shot four times by the enemy. Despite the injuries, she attacked and subdued the shooter, saving her handler and other members of the team. In surgery to save her life, she lost a front leg, and her handler, Staff Sgt. Julian McDonald, later adopted her. Here, with McDonald, and tandem sky jumper Mike Elliott, Layka took part in testing a parachute harness that could make it easier and safer for dogs to help soldiers reach remote locations.

See Layka and Julian's story in this video.

Why it actually might be 'survival of the friendliest' 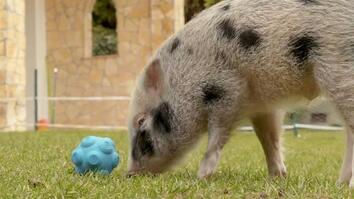 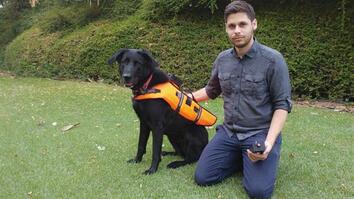 Watch a dog respond to voiceless commands via this vibrating vest
Watch dogs detect signs of epileptic seizures—using their nose
Watch Thousands of Dogs Run Free in This Magical Sanctuary
See the Ways Your Dog Tells You What It Wants
Pets of NatGeo: See How Our Photographers Captured Perfect Pics
This Family Thought They Were Raising a Dog—It Was a Bear
A Brief History of Dogs
Behind the Shot: Episode 3
Why Are These Wolves Chasing a Dog, But Not Bothering a Horse?
See How This Avalanche Rescue Dog Is Enjoying Her Retirement
Brain Games for Old Dogs Could Improve Their Mental Health
Watch an Unlikely Encounter Between a Sled Dog and a Polar Bear
How to Whistle for a Sheepdog the Traditional Welsh Way
Three Puppies Get Stuck in Black Tar—Watch What Happens Next
This Rescued Dog is an Avid Mountain Climber
This is What Your Dog Does When You're Angry
This Ugly-Cute Hairless Dog Has a Surprising History
Watch: This Dog Mom Protects a Leopard Cub From Cannibalism
Dogs Change Facial Expression When Humans Pay Attention
Watch: Rescued Tortoise and Pet Dog Become the 'Best of Friends'
What Makes Some Dogs More Aggressive?
This Amazing Dog Helps to Save Endangered Parrots
Watch: Blue Dogs Spotted in India—What's Causing It?
Dog Meat Sales Continue at Chinese Festival Despite Expected Ban (GRAPHIC VIDEO)
A Day in the Life of 'The Dogist,' Pet Photographer Extraordinaire
Ancient Wild Dog Population Feared Extinct, Now Captured on Camera
Man Punches Kangaroo
Spanish Greyhounds: Finding Loving Homes for Mistreated Dogs
How a Tiny Dog Saved a National Geographic Expedition
Puppies and Scientists Team Up Against Zika and Other Diseases
Why Do We Have Pets?
Puppies: Little-Known Facts About Man's Best Friend
Dogs: (Prehistoric) Man's Best Friend
Meet the Dog Trained to Take Down Poachers
Inside a Dog Rehab Center
Explorers Save Abandoned Puppy
Pups or Pyometra?
Inside a Dog Retirement Home
Sled Dogs: More Than Meets the Eye
This Dog's Nose Saves Honeybees
Pups Rescued From Dog Meat Farm Need Adoption
Alone Across the Outback
Life Below Zero: Sled Dogs
Client Tales: Miracle Puppy
Whatever Happened to the Rescued Sochi Ten?
Fighting Rhino Poaching With Guns, Drones, and Dogs
All Category:
Show More Videos
National Geographic
© 1996-2015 National Geographic Society.
© 2015-2020 National Geographic Partners, LLC.
All rights reserved.