May 29, 2014---Each spring, high school science students from around the world gather for the FIRST Robotics Competition. Started in 1989 by Dean Kamen, who's best known for inventing the Segway scooter, the competition was held this year in St. Louis--blending science, engineering, technology, and sports for an experience that not only helps build minds but can even change kids’ lives.

We want to inspire and change out culture. That’s what we want to do, that’s the message of FIRST. To inspire kids, and get them involved in technology. We think it’s really important to change our culture, because we need engineers in the future, and by doing FIRST we’re changing our culture slowly. By going to outreach, by going to the science museum and teaching girls about technology, because there’s not a lot of girls in the field and we kind of want to change that.

The biggest part of being on the build team you would think is just to build a robot, but it’s never just building the robot because in the end, during the competitions, things happen unexpectedly and it’s just a reflection of life. That’s one of the big things about being in a team, you have to build that camaraderie to basically be able to face these challenges in the future because, of course, nothing ever goes right. That’s just something you have to learn.

When I saw 20 years ago how passionate kids can get about sports, about entertainment, I realized all we had to do was take science, technology and mathematics, and package it as an aspirational activity to be done only after school. You don’t end the season with quizzes and tests like you do in the classroom, if we could end our season of working hard to learn science and technology with a double elimination tournament like in any other sport.

When I joined in 9th grade, I didn’t know anyone except for my sister. Then when I started being social, I started to see a change in my life because I didn’t have that many friends to hang around with. So this has taught me to come out of my shell.

What these kids are really building in six or eight weeks is not a robot. They’re building self-confidence, self-respect.

I have kids who are super shy coming into robotics, because it kind of fits that nerd persona a little bit. And they come into King Tec and they realize that that stuff they’re interested in is actually really cool and then they start to become a little bit more outgoing and really start to, you know, become proud of who they are and what they do. And to the point where they’re not afraid of themselves anymore and they can start to tackle problems with greater and greater magnitude.

May 29, 2014---Each spring, high school science students from around the world gather for the FIRST Robotics Competition. Started in 1989 by Dean Kamen, who's best known for inventing the Segway scooter, the competition was held this year in St. Louis--blending science, engineering, technology, and sports for an experience that not only helps build minds but can even change kids’ lives. 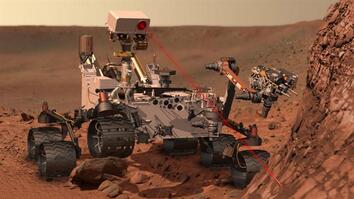 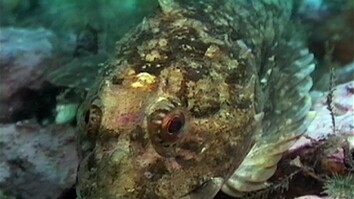 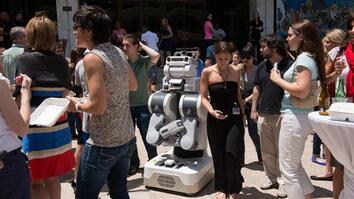 NG Live!: Chad Jenkins: Robots Among Us
NG Live!: Robot vs. Tiger
All Fall Down
Cyborg Rats?
NG Live!: Underwater Robot and Tut's Tomb
I Didn't Know That: Milking a Cow
Robert Wood: Robotic Insects
Tiny, Robotic Bees Could Change the World
ROBOTS 3-D (Trailer)
Meet Madeline, the Robot Tamer
This Low-Cost Robot Can Help You Explore the Ocean
First Look: Go Inside the World’s Deepest Underwater Cave
Vicious Cycle: This Cute Little Robot Has No Idea What’s Coming
Robot vs. Volcano: “Sometimes It’s Just Fun to Blow Stuff Up” (Exclusive)
Watch: Fire Ants Create Towers With Their Own Bodies
Artificial Muscles are Becoming More Human-Like
Watch Face Paint Tell the Story of Human Evolution in One Minute
See What Happens When Wild Elephants Encounter a Roving Camera
This "Robo-Dog" Could One Day Be an Ocean Explorer
Video: Sensation of Movement Recreated in Amputees’ Robotic Arms
This Wiggly Robotic Fish Could Advance Marine Research
Beloved Robot Dogs Honored In Funeral Ceremony
These Robots Use Living Muscle Tissue to Mimic Human Fingers
Watch Magnets Control These 3-D Printed Robots
See a New Robot That Captures Sea Creatures—Gently
Watch How Ordinary Objects Can Be Turned Into Robots
Nanorobotics: Fighting cancer from the inside
Science fiction inspires the future of science. Here’s how.
Will future robots & AI take over?
Inside the Wood Stove Decathlon
World Beard and Mustache Championships
Running Without Sight and Winning Gold
Can You Answer the 2016 Geography Bee's Winning Question?
Meet a Competitive Yo-Yoer
This Teen Boxer Wants A Chance to Compete Wearing Her Hijab
Two Champions, One Family: Hear Their Inspiring Story
This Rock Climbing Kid Has a Hidden Strength: His Super Mom
Inside the Extraordinary Mind of a Pinball World Champion
History of the Olympics
The Geo Bee: A 30-Year History
See Celebrations of Strength at Russia's Sabantuy Festival
Here's Why Scientists Are Coloring Birds’ Heads With Markers
Zambia’s national handball team dreams of Olympic gold in 2020
Inside the World's Toughest Adventure Race
A Senegalese wrestler trains to become the ‘king of the arena’
Meet the winners of the first National Geographic GeoChallenge
All Category:
Show More Videos
National Geographic
© 1996-2015 National Geographic Society.
© 2015-2020 National Geographic Partners, LLC.
All rights reserved.