November 7, 2011—Watch as biologist Luke Dollar uses a blowgun to subdue and study Madagascar's top predator, the fossa. The… more

VO: Fossa is the largest carnivore in Madagascar. It’s the top predator. It’s the natural king of the jungle.

VO: I’m Luke Dollar. For about 17 years, I’ve been coming to Madagascar, a country biologists like myself like to think of as a Petri dish of evolutionary history.

VO: It’s so unique that four out of five organisms you find here, you won’t find anywhere else. One of the most elusive is the fossa, which I study.

Dollar: Fossa in what?

VO: I didn’t come to Madagascar to study the Fossa, I came for the reason that most people come to Madagascar, the lemurs. Lemurs are the famous icons of this island. And I was studying a particular lemur, and then this lemur ups and disappears. Turns that this lemur had been eaten by this predator I’d never heard of before, the fossa.

VO: In other parts of the world we have whole guilds of large carnivores that maintain that top predator level: in Madagascar its one animal. It’s a pretty impressive one too.

Dollar: What we’re aiming for is the fleshy part of it’s thigh.

VO: If I had to imagine what the common ancestor between the mongooses, the cats and the hyenas looked like, way back when, I’d imagine it look a lot like the fossa.

Dollar: She’s scratched up her face a bit, but it’s just light abrasions.

VO: We’ve come to learn that Fossa are active pretty much equally day and night: 3 hours on, 4 hours off, 4 hours on, 3 hours off throughout the 24 hour cycle. And we’ve come to learn from going through tons and tons of scats, Fossa poop, and identifying everything that was in them that they will eat pretty much everything in the forest with a heart beat. Some of that is lemur, some of that is rodent; some of that is reptile but fossa are in fact an equal opportunity predator. Those 2 things alone are just amazing in terms of not having realized this about an animal that is so important to the survival and the maintenance of the systems in Madagascar.

Throughout the island, I estimate that there’s definitely fewer than 3000 fossa left, in the wild. And so I spend half, probably more of my time, working on the conservation of the species.

Because not doing so would guarantee that by the end of my career, I going to have a whole trove of information about a recently extinct species. 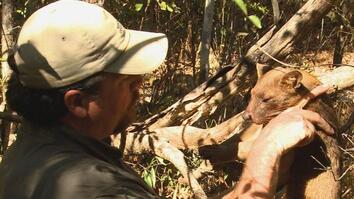 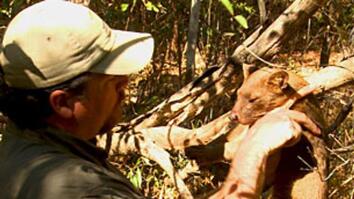 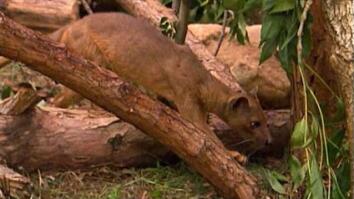