July 23, 2010—In an unprecedented effort, scientists and volunteers are moving up to 700 sea turtle nests from the oil-threatened Gulf to Florida's… more
X

but these turtles are starting their migration a bit early – while still in the egg.

Sea birds swoop down and snatch them as they race from nest to the sea, predators lurk in the waves, and the surf can quickly end their young lives.

Now, a giant oil spill awaits them in the Gulf of Mexico.

So biologists decided to take a risky step and move the nests, and the eggs, away from the Gulf - to the Atlantic coast of Florida.

This is the largest attempt of its kind.

Hundreds of volunteers are joining scientists and government wildlife officials to move nests like this loggerhead nest in Gulf Shores, Alabama.

“This is an unprecedented plan//(edit out list of agencies)// And it is based on the best science of what we need to do for these turtles at this time, because to release them now would be even riskier when they have to go out there and encounter the oil.”

Though they’d usually hatch in the Gulf, these little guys won’t be in completely unfamiliar habitat.

It’s a risky operation. Previous attempts at animal relocation have, at best, a mixed record. But backers say the hatchlings would almost surely die in the Gulf.

“We’re giving them the best chance for survival. Of course a turtle is an air breather, it has to come up for air at some point. And when they come up for air we just hope they don’t come up in oil – if we let them go here. But if they go to the Atlantic, they’re going to make it, hopefully.”

“Turtle eggs are delicate and there’s several moments in time when it’s less risky. And the first time is when they are first laid, when the eggs are still pliable and they are still floating around in the egg. But if you miss that really short window, it’s best to leave them until the point where we are today, which is about 10 days before we think they will hatch, where the hatchlings are formed. They are still delicate. We don’t want them to separate from the inside of the egg membrane or for their yolk sack to come off. But this is the time when they are the least delicate. But we will be very careful with them.”

Volunteers from the turtle rescue group Share the Beach gingerly take out each ping-pong-ball-sized egg from the nest about two feet under the sand.

One rescuer draws lines with a grease pencil on top of each egg to show which side was up in the nest. The other lifts each out and softly tucks it into a sand and egg-filled cooler – carefully keeping it in the same position from the nest – the young turtles can drown in fluid in the egg. Temperature shifts or vibration can also kill the turtles.

The spectacle of saving the loggerhead eggs drew beachgoers like a magnet. A crowd swiftly formed to watch as the rescuers took out 127 eggs.

The nest is far enough from the water that no oil has reached it. But Ingram says the oil’s effect would likely be lethal for young turtles.

“Their food source, which is microorganisms, whether plankton or zooplankton, jellyfish, they are all being affected by the oil.  And so their food source is limited as well as the chemicals in the water.”

After loading all the eggs – even those clearly not viable – in the coolers, biologists loaded them on a special air-cushioned van for transport.

The Institute for Marine Mammal Studies in Gulfport, Mississippi knows firsthand the oil’s danger for turtles. It is caring for injured turtles found in the Gulf. It has also collected hundreds of dead turtles, though necropsies have not yet determined why they’ve died. But the spill is a top suspect.

“It has taken over a large area of their habitat, which is thousands of square miles. What we are seeing is that as their habitat is diminishing they are moving closer to inland waters and that is why we are seeing a large number being found stranded or caught on hooks.”

He says the number of strandings is up tenfold from a normal year.

Though the relocation may not work – the turtles could never acclimate to the new environment, their homing instinct could be confused or too many may never hatch – Solangi (so LONG ghee) thinks it’s a reasonable risk.

“Oil is not just under the sheen. But it could also be water soluble fractions, inhalation, and eating contaminated food. So, when your house is on fire, what do you do? You take the valuables and go somewhere and hope they survive. I hope that the habitat that is provided for them is appropriate, because once those animals go in, it also changes the structure of the habitat they are put in.”

Over the next several months, up to 700 turtle nests from throughout the Gulf Coast are   to be relocated.

Some were transported in this specially equipped truck to NASA’s Kennedy Space Center, and carefully moved into a climate-controlled building. They are monitored for several days, and the first turtles from the Gulf Coast were successfully hatched.  22 Kemp’s Ridley turtles were released on the beach at Canaveral National Seashore.

This video was taken with night vision cameras, because bright lights could disrupt the turtles’ migration into the sea.

The researchers and volunteers hope this scene will be repeated many more times in the coming weeks. 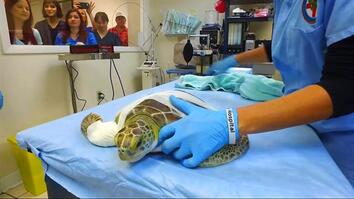 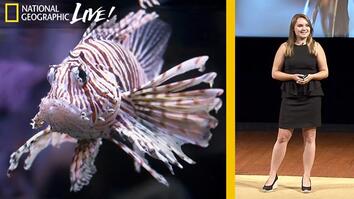 Why Lionfish Should Be Your Favorite Fish to Eat 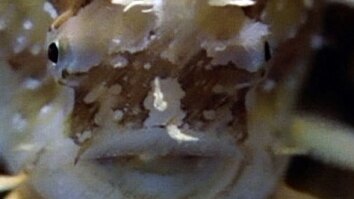