March 2, 2011---Deep in Indonesia, motion-activated cameras have recorded two critically endangered Javan rhinoceroses with their calves. Though the footage is "great news," only 40 individuals remain—with none in captivity, conservationists say.

The first video shows a female Javan rhino with her male calf walking through the rain forest and munching on leaves. At one point, the calf turns away and wags its tail, possibly to swat a fly.

WWF points out that the Javan rhino is one of the world’s rarest mammals, with as few as 40 left in the wild. None are in captivity.

The confirmed population exists on the western tip of Java, in the national park. Its small, concentrated population size contributes to its vulnerability—any natural disaster could wipe out the remaining animals. In addition, because of its perceived medicinal qualities, the rhino remains a target of poachers. A Javan rhino was killed for its horn in 2010 in Vietnam.

The second video shows a different female and her female calf of about one year of age.

A WWF scientist says the videos are great news, and prove the rhinos are breeding in the park.

Conservationists hope to protect the existing animals, and establish a new population through relocation.

March 2, 2011---Deep in Indonesia, motion-activated cameras have recorded two critically endangered Javan rhinoceroses with their calves. Though the footage is "great news," only 40 individuals remain—with none in captivity, conservationists say. 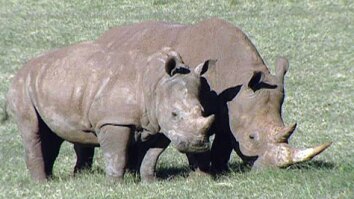 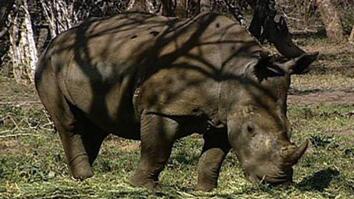 Endangered Baby Rhino Caught on Camera
Photographing the Return of Rhinos and Pandas to the Wild
Africa’s Big Five Animals: What Are They?
Meet Six Rescued Rhinos That Survived Poaching
Largest Ever Ivory Burn Destroys 105 Tons
Is It OK to Trade in Rhino Horn?
Could Safely Removing This Rhino’s Horn Save Its Life?
Watch: Baby Rhino Rescued A Week After Being Shot and Orphaned
Face-off: Playful Elephant vs. Tense Rhino
Can You Save Rhinos By Selling Their Horns?
Watch: North Korea Diplomats Accused of Smuggling Ivory and Rhino Horn
Meet the Heroes Who Protect the Last Northern White Rhinos in the World
Watch Rare Baby Rhino Toddle Around
See What It Takes to Hide a Secret Tracker in a Rhino Horn
All Category:
Show More Videos
National Geographic
© 1996-2015 National Geographic Society.
© 2015-2020 National Geographic Partners, LLC.
All rights reserved.