November 24, 2009—On the 150th anniversary of Darwin's On the Origin of Species, get a Galápagos tortoise's-eye view via a National… more

One of the most iconic animals of the Galapagos Islands is the Giant Tortoise.  Charles Darwin wrote of this tortoise in his famed report, Origin of Species, published 150 years ago this month. The differences between the tortoises from island to island were instrumental for Darwin’s development of his theory of natural selection.

And while Darwin used a notebook for his observations toward explaining his theory of evolution, research tools have gone through their own evolution.

Recently, scientists have begun using one of those modern innovations to study the natural behavior of wild Galapagos Tortoises. – the cutting-edge technology of the National Geographic Crittercam.

As famous as these animals are, surprisingly little is actually known about their day to day behavior. And while it might seem simple to attach a camera to a slow moving tortoise, the Crittercam team ran into plenty of obstacles.  These creatures are used to bulldozing their way through low-lying vines and branches. And with their strength, when the camera mount gets snared on a branch, the mount gives way before the tortoise gives up.

Crittercam inventor Greg Marshall and Associate Kyler Abernathy were invited to the Galapagos’ Darwin Research Station by Dr. Steve Blake of the Max Planck Institute. Blake is coordinating a research partnership with the Galapagos National Park and the Charles Darwin Foundation.  The researchers are conducting extensive studies of the behavior of Galapagos tortoises in the wild… all in the efforts toward conservation of the species.

“This tortoise was around when Lincoln was alive… probably. And to have the ultra-high tech of the Crittercam meet a 150-year-old animal is quite something. And to get this real-time video on a poorly understood and poorly known animal is just fabulous.”

Blake’s team has outfitted several tortoises with GPS monitoring devices. But location is only one part of observation. The Crittercam will provide much needed data on what the tortoises are actually doing as they roam.

Harvested for meat and oil beginning in the 18th century, and preyed upon by introduced predators, the tortoises suffered a steep decline in numbers.  Today, several of the living Galapagos tortoise species are listed as endangered and all are under strict protection.

This video was recorded from the back of a tortoise called Lolo on Santa Cruz Island in May of this year. The Crittercam team hopes to return soon with an improved camera system that can survive scrapes in the wild, and help in the survival of this threatened species. 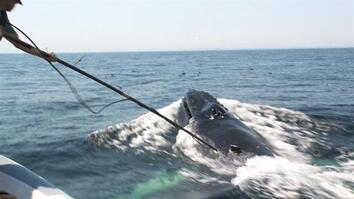 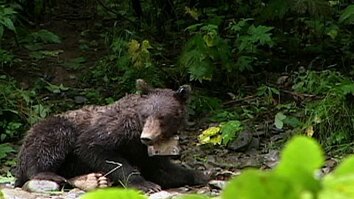 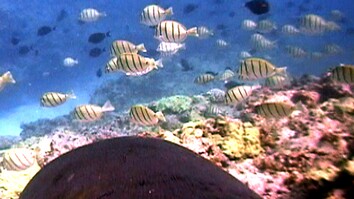