Jan. 15, 2014—Alligators in Florida—fitted with National Geographic Crittercams on their backs—give experts a peek into their daily lives. The video… more
X

"Well personally, it just seemed it would be a lot of fun to work with alligators.  I mean, they're this prehistoric, dinosaur-looking beasts.  But we've been approached by a number of researchers that wanted to do Crittercam work to learn more about alligators.  And this- after a number of trials and experiments with captive alligators, the project with James down in Florida was sort of our real, in-the-field, serious, scientific research expedition."

"So we study in two locations:  NASA—that's Cape Canaveral and the greater Merritt Island Wildlife Refuge. And the second location is a shallow, estuarine impoundment just north of St. Augustine."

"So there's a variety of methods you can use to catch alligators.  We tried to really minimize the stress and impact on the alligator when we capture it just because we are doing this for research and we don't want to injure the animal or stress it out or anything like that."

"As we experimented and considered doing Crittercam work alligators and other crocodilians over the years, we tried to think of good ways to attach the Crittercam.  Now, they got this rough knobby skin.  There's no good, easy way for glues or suctions cups like we use on whales or anything else.  The best idea that we could think of is some sort of harness, almost where they wear it like a backpack.  And so I worked with James and we worked out an idea where with just a simple thin single strap that would hold the Crittercam on but it would be easy to release because it was a single piece and we would be able to use a simple cotton webbing which we could let go. It wasn't something that we invested a lot of time or effort  and money in making the harness.  So that one strap, if it cut, it would drop and we wouldn't care about getting it back.  And we used organic cotton materials so we wouldn't be leaving anything unpleasant in the environment."

"They are reptiles.  They are as what we call cold-blooded.  They are not highly active like a mammal would be.  And they are sit and wait predators a lot of time.  We did get some hunting.  Now, it is not as dramatic as some people want to hope.  We didn't see them taking down deer or wild pigs.  But we got a lot of feeding on smaller animals.  No one has ever documented in this level of detail the feeding rates of these alligators in their natural environment.  And there are apparently a lot of small items, whether they are little fish, or frogs or some little items.  Sometimes we can't tell.  But they seem to eating quite a lot of small things and that's important to know for their behavior and ecology to understand their role in their environment and what they need to survive."

"Well there's one video that we were looking at months later and we're watching the standard view, alligator's at the surface looking out over its head.  And it is sitting there, and it kind of dips to the side a little bit oddly a couple times and tips to the other side.  And the view kind of tips and it goes upside-down and you see it land at the bottom upside-down."

"This was an individual that actually had a portion of its tail missing.     And we called it 'Stubby' was its name.  And poor Stubby was in some pretty rough water and we think it actually passed out for a minute just from getting jostled around.   And it sank to the bottom, rested on its back and then swam right back to the surface.  No worse for the wear.  But, yeah, it was pretty interesting to see that 'narcoleptic' alligator."

"I just want to thank the Crittercam team for offering me this opportunity to explore the life of alligators in absence of humans.  It was really a fun and interesting experience and we really gained a lot of knowledge from it.  And I just really want to, you know, acknowledge.  They really facilitated it and helped out." 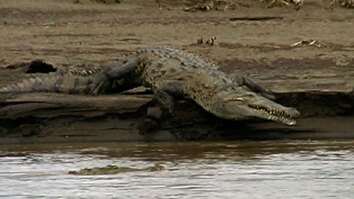 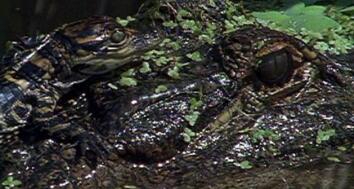 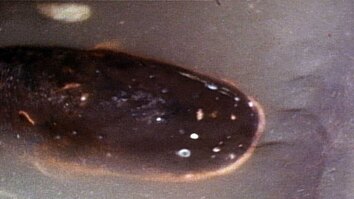