JONNY PHILLIPS: Each year the average person produces 50 liters of feces and 500 liters of urine.

RICHARD AMBROSE: That's equivalent to 22 of these containers and that means that over 25 million tons of human waste disappears down the UK's 'U' bends annually.  And that's not all.  Anything that goes down a drain is classified as sewage.

NARRATOR: And that includes rainwater, bath water, laundry detergents, and many industrial by-products.  There are a staggering 400,000 kilometer of sewers in the UK. That's longer than all our public roads put together.

RICHARD AMBROSE: Which is mainly thanks to just one bloke, an engineer called Joseph Bazalgette.

NARRATOR: Back in the mid-1800s, before the days of underground sewers, London was in a real mess. Human waste was everywhere a good deal of it finding its way into the Thames.  Outbreaks of cholera became rife, killing over 10,000 people in one particularly bad year.

JONNY PHILLIPS: And that wasn't the only problem.  During what became known as the Great Stink of 1858 the smell from the River Thames became so over powering that Parliament had to be suspended.

NARRATOR: Bazalgette came up with a radical idea.  He suggested a sewage super highway.

RICHARD AMBROSE: I love it, ho oh, it's great.

JONNY [off camera]: Coming down.

NARRATOR: Two massive main sewers fed by a huge network of underground pipes from all corners of London. 7 years and 318 million bricks later it was complete.

JONNY PHILLIPS: This is the northern outflow in East London, one of the two main arteries into which all of the six other sewers flow.

NARRATOR: It was designed so sewage would flow - mainly under gravity - through a series of increasingly wider diameter pipes.  In addition, pumping stations were built along the route to help maintain an even flow.

JONNY PHILLIPS: It was a simple but effective system for carrying waste well away from the city, releasing it into the Thames at high tide from where it would be washed out to sea.

RICHARD AMBROSE: It proved so successful the system was copied across the country and in many other major cities across the world.

NARRATOR: The key is to keep the sewage moving, so throughout the system, there are massive steel gates weighing 15 tons which can divert the flow.  When the level subsides, maintenance teams can access sections of the sewer in safety.

ROB SMITH: Oh yes we've, we've had major blockages.  Uh, one of the last ones we had was fat, Leicester Square.  Um, we actually spent 6 weeks up there actually clearing it and the end job was actually going through and actually digging it out by hand.

RICHARD AMBROSE: And what's, what's the weirdest thing you've ever found down here?

NARRATOR: Bazalgette's ingenious system has coped with explosives, blockages, hundreds of thousands of rats and of course London's sewage for nearly 150 years. 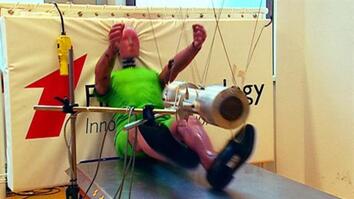