The National Geographic Live series brings thought-provoking presentations by today’s leading explorers, scientists, photographers, and performing artists right to you. Each presentation is filmed in front of a live audience at National Geographic headquarters in Washington, D.C. New clips air every Monday.
Transcript
I went to Tanzania and I went to an area in Tanzania near Lake Eyasi, where there's Hadza people. It is the oldest diet remaining on Earth. And the Hadza are about 1,300-1,500 and out of these 1,500 there's 300 that are living a real... last full-time hunter-gatherer, full-time meaning there's no back-up option. There's no little bit of agriculture-planting whatever. There's no herding of something. They live strictly off hunting and gathering food.

Africa is, you know, difficult. You need to coordinate everything. I was going really deep in the bush I need to have all the food with me, all the water with me. And then I meet with the Hadza. And in front of me these guys show up. Band of brothers, you know, they are like “wow” So they are 100 percent hunter-gatherer and they go around every day looking for food every morning.

This guy is like this... what they like most is honey. They gather a lot of it. And to get honey they make fire first. They don't have light or matches, they don't have this stuff. They live really self-sufficiently in the bush, at least these guys. Some other guys, you know there's other areas of Hadza land where there is more touristy area but these guys were really the real deal. They make fire, then they smoke the beehive and then they get the honey in it. Some time there is a bird called the Honeyguide, that would bring them to the honey, to the beehive. And then they-- everybody is really excited. They don't store stuff. They get too excited. They get bitten, they get stung. I got stung too. These are killer bees so bit scary, you know... Honey is incredible. It's like the power-bar, the ultimate power-bar. There's so much energy in this. And on top of it they often eat it like this straight with larva. You can see the little white spot, these are larva. So you get this sweet and sour mixture in your mouth. It's just-- you feel like “wow, this is so powerful.” There's protein and there is this incredible amount of energy coming into you. They share it with the women there. They sometime put some on the side to bring to the elderly that's their camp or their real babies. But they eat everything on the spot more or less otherwise.

One thing I have to tell you right about the Hadza is they smoke a lot of marijuana. And so they trade this stuff and this is after they smoke. This goes on for five minutes, I had to cut it short. But then this goes on like this. So, they do that, you know, they are really living in the moment it doesn't matter, you know, it's just whoo. It's difficult for me to coordinate things. “Can we do that in ten minutes?” “Ah, yeah, it's alright man. Take it easy, yo!” I had to kind of Zen-out. So, now you know in what state they are when I am photographing them. Just so you know.

That's Mokoa and his wife Wande. And in the morning Mokoa goes hunting and Wande goes foraging. Often the woman looks for tubers. There's this vine coming out of the trees, they locate them, dig they find the root, they cut out the root with a knife and they keep the root, and then it's a little bit like potato. When they move around and they pass something edible they will just grab food. And some time they are looking straight but they see food on the corner of their eye, and they just go like this. It's quite amazing. They just keep in movement but eating, feeding themselves. This is Kongolobe, it's a special berry that grows there. And then they go back to the watering hole drink up and go back to camp.

Camp is these beautiful houses that are like upside down nests. The women always do them. Inside, you know, it's quite beautiful at night. This woman was cooking stork. And outside the men are yapping and yapping like they always do everywhere, anywhere. And they are telling hunting stories. Mokoa goes in the morning hunting and I follow him around. They take all different kind of arrows. There's the arrow for the bird, there's the poison arrow for the big animals, there's the other one, you know, for medium animals. And then there is the one on the right to finish up a wounded animal. They walk for hours, it's very hard, it's very exhausting. Some time they only get these tiny little birds. They don't get many animals. It's quite rare. There are animals but, you know they are used to being hunted for thousands and thousands of years and they hear you coming from so far away and I was with them. And you know, so it was even extra challenging.

The ancestors of the Hadza have been living in Hadza land for about 40,000 years. That's what anthropology tells us. It's incredible, they have left no impact on their environment. So they go around with bow and arrows. They often miss their target. This is Kampala. He had missed a... just a bird there. And whenever there's a higher viewpoint like this they climb up on top of trees to look for wildlife. They usually get up early morning and hunt until noon or something like that. Below trees they make these blinds to hunt from blinds. They some time, they get stork, this migratory bird that comes from Europe. The hunting process is very meditative. You know, you're getting really into the rhythm because nobody talks. They talk very quietly and you walk and you walk. It's very beautiful. It's not like hunting with rifle because the bow don't make any noises when they're hunting. But then when they see animals it becomes very hectic and they start running around. They eat everything they can find except snake and elephants. Elephants, the arrow can't go through their skins and snake, they're just scared of them. This is a little baby bush that they got that day. And then they, you know, have a smoke break. I couldn't believe it. I was like, oh, unbelievable. They roll in newspaper, there's no... You know, they get newspaper and they roll straight in there. And then, you know, it doesn't matter right after that they are running around they're incredibly flat. When they run they have their upper body that is kind of-- back like this. It's quite impressive to see them running. And then get dik-dik like this. This is the smallest gazelle can be found in Africa. And then Mokoa's like we'll get up to a higher point of view. He will point and see, something there and it was really intense. And we run there, and you know, two hours, three hours later, after much tracking and stuff they get this vervet monkey that fell off that tree. It was very powerful.

I love my time with the Hadza. You know, they know how to strike a pose too, This is Mokoa. And you know, this is a left camp. This is what they leave behind. This stack of branches, the grass has fallen off, this is all that's left. Think about that. They have lived for 40,000 years in that area and there's no tracks. You know, there's nothing left behind from their times. The thing with their story that really strike me is that wherever you eat local and you spend energy to get your food you are for the better. And this would be the message that I want to hope and give to that... through that, you know through my experience living with these people in all this. If you can do anything to enforce yourself to grow something or if you eat meat, you know, learn to kill a chicken. I mean, you know, if you're going to eat meat you should learn once in your life... I've killed a goat once since I've seen that because I eat meat every day, not every day, you know but every three days maybe. And so I think it's important to understand where the food comes from. And to do everything you can to eat local. Well, that's my point through that experiences. Thank you very much. Thank you. 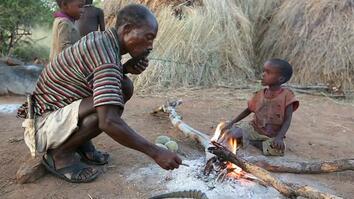 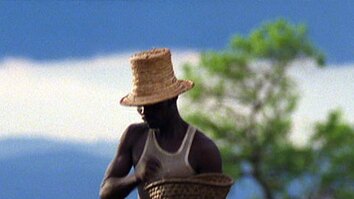 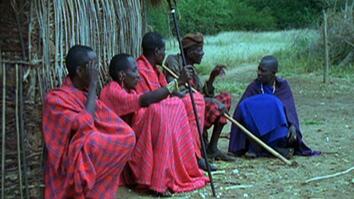