(Part 2 of 7) The Inuit of Greenland have survived for generations eating almost nothing but meat. Photographer Matthieu Paley captures the bloody… more
X

(Part 2 of 7) The Inuit of Greenland have survived for generations eating almost nothing but meat. Photographer Matthieu Paley captures the bloody job of securing a meal in this remote territory.
Upcoming Events at National Geographic Live
The National Geographic Live series brings thought-provoking presentations by today’s leading explorers, scientists, photographers, and performing artists right to you. Each presentation is filmed in front of a live audience at National Geographic headquarters in Washington, D.C. New clips air every Monday.
Transcript
I decided after much research to go to Greenland. And I went to the eastern part of Greenland which is less inhabited. The western part is quite inhabited. Also I was going in December, so if I would go too far north there wouldn't be any light whatsoever. I wanted some light, it's useful when you take pictures. And so, I went to this place called Isortoq.

There's about 110,000 Inuits. There's about 16,000 Iso living in the US. And they eat only meat, traditionally. And by far has made the transition to market food. But if I would have wanted to really see a true Inuit diet I would have needed to go there 60, 50-60 years ago. It's not the case, but they still, you know, go on with a lot of traditional food and do eat that a lot. So, that's what I would be focusing on.

This is Isortoq. That's the whole of it. And it took me two flight and two helicopter ride to get there. It's very surreal atmosphere, I've never been to the Arctic. Never been up there. Lots of dog howling and very nostalgic feel about the place. I had contacted a family before. So when I arrived I was met by this family. And I spent ten days sleeping there in the living room. I was staying with Bent, he's there in green and Dina, standing up. And they are hunters. They go hunting a few times a week. They are active hunters still. Every day they would put these pile of clothes on the floor and they just start to put one layer after the other, after the other, after the other and boom we go out.

So we go out, we break the thin ice that have pile up in the night by boat. We drive out and they are looking for-- what they like most is seal. And they, you know, hunt with rifles. They used to hunt with harpoons. That was about 30-40-50 years ago. So she's looking at this environment, looking for little black spot to pop up. By then when I took that picture I wasn't sure what we were looking for because for four days we went and we didn't get anything. It was quite depressing. And then that day we only got this ptarmigan, they are called, these birds. Quite common there in the Arctic. Then I see what she is doing in the kitchen. She, you know, gut the birds, prepare them and stuff and I am taking pictures and I am thinking, this is not super interesting, it doesn't--  it doesn't call out for Arctic, it's just not working right now. You know, it's the beginning of the story so I am impatient to try and get something done here, visually, that is telling. So I said, I asked Dina, cooking, I said “do you have anything like more Arctic, like whale?” And she's like, “yeah, I got plenty of whale meat.” So, she popped out this beautiful bag of... You know, I am like, “no, not working.” Ah, yeah... Well, I put that, it's not a good picture but it's just to show you the struggle as a photographer that you encounter some time. You fly there, you have these ideas of, you know, they are going to be with harpoon throwing at whales and stuff, and when you get there it's just plastic bag coming out of the freezer. - It doesn't work.

So then I turned to Bent and I said, “Dude, it's not working, I am not getting anything, you know, I need to look at meat and know which animals it comes from.” He's like, “yeah, well, there's this place on the edge of town... Town, you know, the settlement, the village, where we keep a lot of meat that we... you know, that we you know, we go and get. When we want more meat for us or for animals, for the dogs.” I say, “yeah.” We arrive at this wooden box, he takes out the stones and lifts it and there's this really pungent smell of fat, and ocean and animal, you know, that comes out of it. And I am really excited, like “wow. “And then he starts to take out the stuff. He sorts out what he's going to give to his dogs. He sorts out and, you know, I look at this and I'm like, “wow.” This is killer whale jaw, you know, whale rib, bearded seal paw, these are all animals that they have hunted during the migration when whales come by their village. And for me it's telling. Finally I got something. We return back, he's going to give a good portion to the dogs because the dogs help the Inuits hunting and they always split the result of the hunt. And, you know, stores most of it in the storage gives some to the dogs and goes and brings it to Dina for cooking.

And look at it when we return with meat to the village. You know, the dogs are super excited they know meal is coming. And so, you know, you walk around and you have this puppy licking the fat off the fin of a killer whale. Quite surreal in the night. But then I still needed to get some hunting scene. You know something that is telling what you see.

And then I hear about this other hunter. Magnus, who would often go hunting on canoe because you can approach animals much more quietly. And I said, “hey, bring me on.” And it was quite a terrifying experience. I do a lot of kayaking, I love kayaking. But not in, you know, freezing cold water with... thousands of dollars of equipment hanging around my neck, so...

That means head of a seal.  Sign language. And so, that's right there, you see? That's the head of a seal, it comes out for about 10-20 seconds and then it would just dive back in. So, you have to be quick, you have to be close. Also you need quiet sea because if there's waves you can't see the head and so I am just following behind. And, you know, that day we didn't get anything. The next day after we didn't get anything. I went back on the... on the boat with Bent and Dina and then finally one day they got a seal. And I had thought about that situation as wow, this is just gory and it's going to be difficult. In fact, it is difficult because in the Inuit eating means blood. There's going to be spilling of blood. This is meat-only diet traditionally. The only thing you can maybe eat are berries in summer that is non-meat, berries and a bit of seaweed, but otherwise you survive on meat, that's all.

And so it means, you're the hunter, but you're the butcher. Everybody, all the hunters they know how to butcher their meat. That's how you survive, traditionally in the Arctic. That's how they have been doing that and surviving for thousands of years. One delicacy that they all love is the liver of the seal. And this is son of Bent having a piece of fresh liver of the seal that his father brought back. I tasted, it's very tasty like iron. It tastes like very strong. For holidays and birthdays then they really put an effort in eating almost only traditional. These are stuffed intestines and, you know, smoked seal meat. Muktuk it is called, it's the blubber of the whale. There's some salmon also you can see that they fish in summer and dry it. They also eat musk-ox.

And this is a bit of a shocking image to many but the kid doesn't seem troubled at all. I was like, “whoa, what is that alien?” It's the head of a polar bear, that his father hunted. It's legal to hunt polar bear to a certain amount. I think it's about 30 polar bear that can be killed every year. Under very strict situation, only by Inuits. And it's a very important traditional food. What's interesting with polar bear is that the person who first see the animal will be the person that gets all the meat. Not the guy who will kill it. Bit of a feel good image after that. You can all relax. And just imagine not knowing not long ago for this Inuits, not knowing what it was. It must have been just a ground for just tons of religious, spiritual experiences. 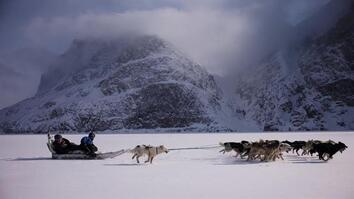 Capturing Climate Change Through the Lives of the Inuit