Adventurers Amber Valenti and Krystle Wright are half of the all-women team that traveled 2,700 miles down the Amur River through the wilds of… more
X

Upcoming Events at National Geographic Live
The National Geographic Live series brings thought-provoking presentations by today’s leading explorers, scientists, photographers, and performing artists right to you. Each presentation is filmed in front of a live audience at National Geographic headquarters in Washington, D.C. New clips air every Monday.
Transcript
Amber: The concept became to travel the length of the Amur River, from its Mongolian headwaters out to the Pacific Ocean. It was a challenging time and a joyful time all at once. It's the kind of place that makes you feel closer to yourself and closer to something a lot bigger than you.

Hi, it's so great to be here with all of you tonight. I'm really excited and I know Krystle will agree, to be in this room, sharing stories from a trip that has been really meaningful to both of us. So, 60 percent of the world's great rivers are dammed at this point. One of my inspirations was getting curious about some of these big rivers, that are still free-flowing, that are left on our planet. And I came across this list of the ten longest free-flowing rivers that still existed on our planet. But there was one name that I had never heard of before, and it was the Amur River. This place has leopards, tigers still there. It has the largest Salmonidae fish in the world. Not only that, it had not a single dam on its entire length.

So, this river is almost 3,000 miles long, and that would be like paddling from New York to San Francisco and not seeing a single dam. And then, not to mention, it started in this incredible part of Mongolia, in this wild, wild part of northern Mongolia. And then traversed all the way through southern Siberia, through some incredibly wild country, to the Pacific Ocean. So, with that and all that information that we gathered, the Nobody's River project was born. The concept became to travel the length of the Amur River by whatever means we could, from its Mongolian headwaters, all the way through southern Siberia, along the border of China and Russia, out to the Pacific Ocean.

So, this is our team of wild women that I slowly assembled. And the one with the blonde pigtails, that's Becca Dennis, and then, in the straw hat, that's Sabra Purdy. I am next to Sabra and on the far end is Krystle. So, Becca is now a nursing student and a Grand Canyon guide, and is just this incredible woman on the water in her own right. And her and I met guiding on the Tuolumne River in California. That same summer that I met Becca she was falling in love with this guy named Zach Orman. And I've loved them dearly ever since. This is Sabra Purdy. She is a river ecologist. And I've never seen anybody get so excited about water quality measures. Invertebrates, slimy things in the river. It was truly her passion. The last piece of the puzzle was a photographer. I really think that Krystle introduces herself best.

Hello. Now, you might ask where did I get that language. And if you Skype with my mom, you'll find out pretty fast. So, Amber... Yeah, Amber was our leader on this trip. This was her sort of brainchild, but I think Amber could be one of the best expedition leaders that I have been with. Someone with an amazing pallet of skills. You know, everything from remote medicine... ...to raging dance parties, anywhere: Mongolian fields, Russian bloody towns, bad Chinese disco, - Russian restaurants-

Oh, that was good. We thought everything was just going to happen smoothly, but like any adventure, it doesn't. But all you need to know right now is that on June 1st we were in Ulaanbaatar. And here was our first night with the horsemen, and we're thrown right into the thick of their culture. And basically, the next day, we were going to head out into the wilderness with these guys. They were gonna lead us to the headwaters of the Onon River. We tried to make conversation. It was a little tricky. We had a little Lonely Planet guide, pointing out words. And, of course, we brought our maps. We brought the GPS units so we were trying to encourage them to use our equipment. It's amazing when you can't talk to someone how much you still can connect with them. Especially by the simple gestures, but thankfully we did have Manejalf, who we liked to call Manji. And he was there to help us translate, 'cause we definitely got into some hairy situations where we really needed that translation. You couldn't just wing it and hope for the best. 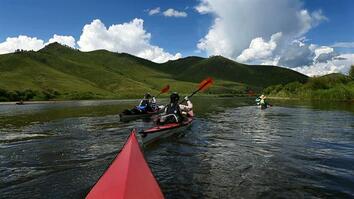 'Four Women Prepare to Tackle a Wild River': Behind the Scenes 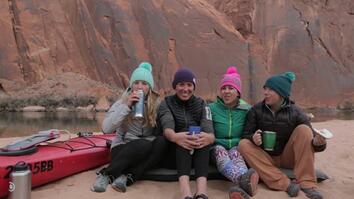 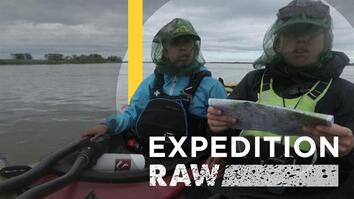