Transcript
Brian Skerry: How I wish everyone saw Bluefin Tuna the way that I have. For being underwater with them I know of their greatness and I am certain they possess abilities and hold secrets we can barely imagine.

One of my more recent stories in the magazine; in March of this year the magazine published a story that I photographed about Bluefin Tuna. This is a picture that I made in the Mediterranean off of Spain where Bluefin are caught in giant purse seine nets. Methods of catching tuna like this have been very destructive. They have actually resulted in the collapse of tuna stocks in the Mediterranean and throughout the Atlantic... with populations being decimated.

And this is an image that I made at the daily tuna auction at the Tsukiji fish market in Tokyo. Every single morning the tuna bodies are lined up like cordwood and auctioned off to the highest bidder. It's really the lust for sushi that has created this. You know, I live in New England and I've been on the water most of my life. And I can remember back in the early 70's, fishermen catching Bluefin Tuna and there was no market for them. They used to call them horse-mackerel. They considered them trash fish and would bury them on the beach if they caught one. There was really nothing for them but once that... that sushi craze sort of took place and began, the prices skyrocketed and all of a sudden the stocks began to plummet. But this is what happens, you know, every single day.

We can't sustain this kind of thing. This animal now has become the most valuable animal on the planet. A single Bluefin has sold for over a million dollars at this-- these auctions in Tokyo. So you can imagine with a bounty like that on their head the future is probably not very bright. There's actually three species of Bluefin but we were focusing on the biggest and, and sort of most magnificent, the Atlantic Bluefin Tuna. It's an animal that's quite unlike any other. You know, these are animals that continue to grow their entire lives. If weren't so efficient at catching them there would be 30-year old Bluefin out there that weigh a ton. These are animals that are capable of generating heat in their body. They are effectively a warm-blooded fish. And because of that they can swim practically from the equator to the poles in search of their prey. They criss-cross entire oceans in the course of the year. There's no predator on land that covers that kind of territory. Um... you know, they are truly amazing fish.

But to find Bluefin in the wild, I had to travel to a place where they are hunted. And this time it was the Gulf of St. Lawrence in Canada. And I would probably rather not see them caught at all, but in small ports, in Nova Scotia and Prince Edward Island fishermen head out during their season for just a very brief time and they use only a rod and a reel to catch one fish at a time. The season is very brief. When I was up there it only lasted for about a day. They have extended it now a little bit longer but it's still the same quota, which is very low. And it's essentially one man, one fish. As soon as they are caught they are processed on the dock, iced and shipped off to Japan.

And in those weeks before the fishing season begins researchers also come here to tag Bluefin. They are trying to do science, trying to look at their migrations, where they go and where they migrate to and from. And they work with local fishermen as we see here who'll catch the fish. When they hook up on a giant Bluefin sometimes it takes, you know, close to two hours to reel one in and get it close to the boat. And they've worked with a variety of tags to put on these animals. But the most effective or the most productive over these years has been satellite tags. They can tag the animal and it can stay on for many months and then it pops off, sends up a signal where they can retrieve it and download the data and see exactly where this tuna has migrated to. And it's been very valuable as a conservation tool. And once they catch the tuna, after maybe a two-hour fight, they get it close to the boat and then they have to get it up on deck very quickly and do the science and work it up. One of the researchers, his job is the lip-hooker, where he uses this big sort of metal hook to go through the bottom jaw, which is the strongest and then they very quickly get it up on the boat and try to do up their... their science here. You can see the captain of the boat is aerating the fish, he is putting water inside to aerate the gills, keep it alive and they are measuring it, both length and girth. They are taking pictures of the animal, they are taking a DNA sample, blood, all happens usually in about a minute. It's amazing how well they work. So this was a GoPro video that we did that just shows how this all happens very quickly. So they measured as I said, and you can see the size of these animals. It's not the best with some shadows here, but you do get a sense of the massive beast that this Bluefin is. So, within, you know, 60 or 70 seconds the fish is back into the water and swimming off with that tag inside of it.

I also wanted to show another fishery for Bluefin. One that happens on the other side of the Atlantic. And this is one that actually dates back thousands of years. This is a view of a place called Barbate, Spain. A little town in the Atlantic on the southern coast of Spain and it's one of many locations that has done this very old method of catching Bluefin for centuries. It's a method called the Almadraba Fishery. There used to be many of these places. Today there is just a handful left and Barbate is one of them. But what they do is they use a series of nets to sort of passively catch the tuna as they are migrating from the Atlantic through the, uh... Gibraltar Straits into the Mediterranean and they get caught in this net.

There's sort of a line in the ocean there, those are a line of buoys. And those are the buoys, those are the nets, so it's quite close to shore that this all happens. The way it works is the fish once they hit the tail of that net they move through a series of chambers, a series of rooms, different nets and when they have enough tuna in the final chamber, the cámara de muerte, the chamber of death, they sort of close it off and then they begin lifting up the bottom and they hold what's known as a matanza, the massacre. And, here we see that very thing happening. These fishermen use these old wooden boats and they form a square around that last chamber and then they slowly begin muscling up those nets and the tuna, you know begin thrashing in very shallow waters. We see a Bluefin right up here swimming right up on the surface, almost full body out of the water. And then once they get the sort of tuna up there, they hook them and bring them on this one boat where they immediately bleed them and begin processing them and...

You know, having swam with Bluefin underwater it's always a little difficult for me to see this kind of thing. And I understand what they are doing and it's a way of life. But in some ways for me it was like seeing a crime unfold, you know. I had such reverence for these animals. I've always sort of wished that I could take these folks underwater, very few of them dive. But I always wished I could take them underwater to see Bluefin within its own element and I have to believe it would change their mindset. To be underwater with these magnificent animals is to witness the divine sense of nature. They are the true thoroughbreds of the sea with few if any equals. With streamline design that's been studied by naval engineers, they swim faster than a torpedo. And likely posses physical endurance that we can hardly fathom. How I wish everyone saw Bluefin Tuna the way that I have. For being underwater with them I know of their greatness and I am certain they posses abilities and hold secrets we can barely imagine. Thanks very much. 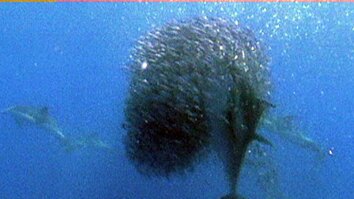 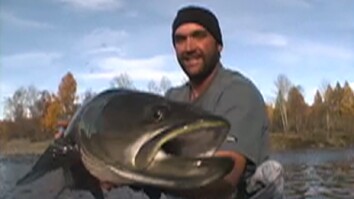 Herring Hazards
Albatross Fall for Fish Bait
Moken
The Monster 11-Ton Net That Threatened Hawaii’s Coast
Sea Turtle Rescue: Tangled in Fishing Net
Watch a Fish Transform From Animal to Candle
Huge Fish Drags Fisherman Around After Stealing His Catch
Fishing With Dynamite Is Harmful—Why Does It Persist?
How Eating Venomous Lionfish Helps the Environment
New Study: Manta Rays Prefer Staycations Over Long Migrations
TIL: Lionfish Jewelry Can Help Save the Ocean
Some Say This Goliath Fish, Once Overfished, Is Now a Nuisance
Inside the Struggle to Save an Endangered Grouper Species
Watch: Beachgoers Rescue Shark From Fishing Line
Watch: Nearly 10,000 People Ice Fish for Charity
These Slimy Fish Lips Are Made for Eating Coral
See Why This Island is Canada’s Best Kept Secret
Exclusive: Our Full Interview with Paul McCartney
New Species of Snailfish is Deepest Fish Ever Caught
Sneaky Octopus Tries to Steal Dinner From a Fisherman
For 40 Days of the Year, These People Live in Complete Darkness
After Years of War, Nature is Flourishing on These Tiny Islands
Sea Turtle Rescued From Abandoned 'Ghost Net' Snare
This Plan to Save a Rare Albatross From Extinction Just Might Work
See How Fishermen Are Working Together to Protect These Lagoons
In This Ancient Japanese Tradition, Birds Do the Fishing
Want to Keep Sharks Away? Try Magnets
Experience a traditional whale hunt in northern Alaska
Meet the ice men of Mumbai’s largest fish market
Watch wild dolphins help fishermen—and get a reward
Sting Rays
Face-Off With a Deadly Predator
Humpback Whales
Leatherback Turtles
Polar Bear
Leopard Seal
Penguins: No Fail at Mealtime
NG Live!: Ocean Soul
NG Live! The Amazing Squid
NG Live!: Paul Nicklen: Emperors of the Ice
David Doubilet & Jennifer Hayes: From Islands to Ice
David Doubilet: Behind the Photo
Underwater Filmmaker Faces Off With Sharks
Manu San Felix: Revealing the Sea’s Treasures
Dolphins: Even Smarter Than You Thought
Natural Disaster Category:
Show More Videos
National Geographic
© 1996-2015 National Geographic Society.
© 2015-2020 National Geographic Partners, LLC.
All rights reserved.