Her name is synonomous with beauty and intrigue. Although her ambitions were never realized, she has achieved immortality through her personal story… more
X

Her name is synonomous with beauty and intrigue. Although her ambitions were never realized, she has achieved immortality through her personal story of love and tragedy.


Transcript
Her name is synonymous with beauty, power, intrigue and ultimately tragedy.

In 69 BC Cleopatra was born into Egypt’s Ptolemaic dynasty, a dynasty in decline and under the protection of Rome.  At the age of 18 she assumed the throne along with her younger brother as husband, Ptolemy XIII, according to Egyptian royal custom.  But these royal siblings were hostile to each other and Cleopatra was soon forced from power.  Down but not out, Cleopatra waited for the right opportunity to prove her political cunning.

That opportunity came when Julius Caesar, the newly minted victor in Rome’s civil war, arrived in Alexandria, Egypt, in pursuit of a renegade Roman general.  As legend has it, Cleopatra smuggled herself into his inner sanctum rolled up inside a rug.  Caesar was captivated and they soon fell in love.  He took arms against Cleopatra’s rivals, and restored her to the throne.  Shortly after she gave birth to a boy, Caesarion, whom she claimed was Caesar’s son.

Egypt was a vastly wealthy country and Cleopatra sought to keep it independent of Rome. Her affair with Caesar kept the Romans from taking direct Roman control of Egypt, but his assassination made her status, and that of her country uncertain.  Searching for allies among Rome’s new leaders, she was delighted when Marc Antony, one of Caesar’s heir-apparents, sent for her.  Marc Anthony fell head over heels for the Egyptian queen­--and her riches.  Together they set up court in Alexandria, an arrangement that elevated Cleopatra from “protected” sovereign to a fully independent monarch.

Cleopatra and Antony shared a legendary love matched by their insatiable appetite for empire.  They eventually married and became the power couple of Eastern Mediterranean.  Antony tried to bring some Roman territories under her domain. And he declared Cleopatra’s son Caesarion to be the son and the rightful heir to Julius Ceasar.  That infuriated Mark Anthony’s Roman rival, Octavian, who went to war against them.  Antony and Cleopatra were quickly defeated at the Battle of Actium in 31 BC.

Legend tells us that Cleopatra spread false rumors of her death.  Consumed by grief over her death, Antony stabbed himself.  But word came she was still alive, and Antony’s followers carried him to Cleopatra where he died in her arms.  After 22 years as queen, Cleopatra’s fortunes were fast unraveling.  She tried in vain to make peace with Octavian.  Rather than be humiliated by the Romans in defeat, she took hold of an asp, permitting it to inflict a poisonous –and mortal-- wound.  With her death, the fate of the Ptolemaic dynasty was sealed, and Egypt fell firmly into Roman hands.

Although her ambitions were never realized, Cleopatra has achieved immortality through her personal story of love and tragedy.

Her name is synonomous with beauty and intrigue. Although her ambitions were never realized, she has achieved immortality through her personal story of love and tragedy. 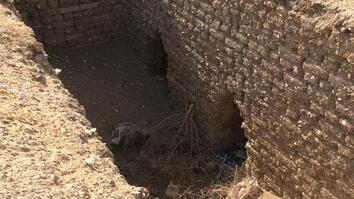 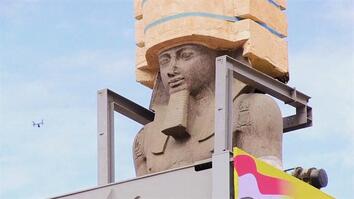