As a professional filmmaker and photographer, Tom Campbell pursues light and motion.

But under the sea, he must also predict the behavior of a wild animal.

SOUNDBITE: Tom Campbell, Underwater Filmmaker and Photographer - “There’s an area that you can’t call the shot. You don’t know what the animal’s gonna do. So you make a calculated risk and you depend on your experience and your training and your abilities of a photographer that you’ve always got that overwhelming desire to get that picture.”

Whale sharks are the largest fish in the sea and can grow to more than 30 feet long.

That someone is Adra Ross, who didn’t learn to SCUBA dive until she turned 50.

SOUNDBITE: Adra Ross, SCUBA diver - “The trip to Australia was a great way to start my diving experience. I knew it was going to be something thrilling and exciting.”

As a seasoned professional, Tom knows he can’t force the magic, but he’s always ready.

Suddenly, he sees his chance.

There’s a shark starting to swim away. We suddenly saw he opened up his mouth and this school of yellow fish that was below him moved right up into the center of his mouth.

Tom and Adra kick into high gear and swim hard to overtake the whale shark.

SOUNDBITE: Tom Campbell, Underwater Filmmaker and Photographer - She’s swimming as hard as she can and I needed to catch up with the shark, pushing the camera housing. And while I was swimming, I had to set the distance, I had to set the F-stop to the light factor, and I had to get everything set up on the lens just right. I swam ahead of the shark, got to the point where I could turn around with just enough time to squeeze the shutter, so I got one shot...squeezed it off, and that was it.”

Tom’s single frame proved to be a winner.

SOUNDBITE: Tom Campbell, Underwater Filmmaker and Photographer - “The light was right, the animal was there, the diver was in position, I got that split second to capture some kind of magic, and it was a killer shot.” 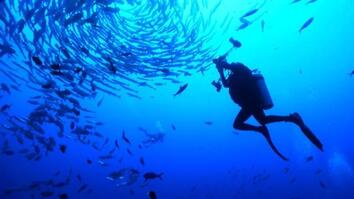 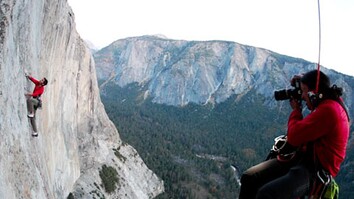 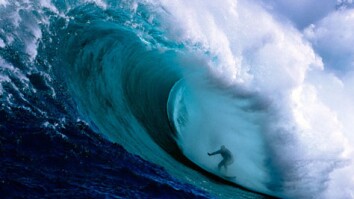