What looks like flashing neon is light refracting off of thousands of cilia-tiny, hair-like propellers along comb-like ridges that give the animals their name: comb jellies.

These tiny creatures aren't jellyfish, though they look similar.

They may look pretty, but appearances, as is usually the case, are deceiving.

They have other, weirder weapons.

In their hunt for plankton, crustaceans and each other, some comb jellies, like this beroe, have evolved a simple approach: a big mouth and a bigger appetite.

It has no brain or specialized senses-only a primitive neural net around the mouth that can detect chemical traces in the water.

When it bumps into something edible, it simply opens wide...very wide.

The beroe zips its mouth shut, holding its prey in place with specialized hooks.

Other comb jellies have a more complicated way of snatching up prey.

Coating the tentacles are specialized adhesive cells that act like glue.

Once trapped, prey are drawn into the gut and digested.

Size is rarely an issue.

The comb jelly snaps its tentacles at the green jellyfish. But it can't drag it in.

The jellyfish counterattacks with the stinging tentacles.

The jellyfish pulls free and escapes with its life.

The comb jelly flickers through the ocean, unconcerned, and ready for its next opportunity. 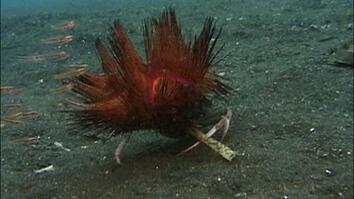 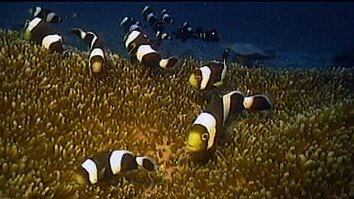 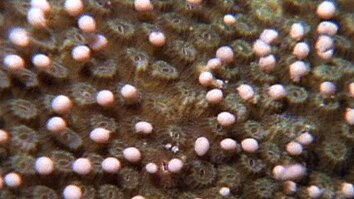