Perched in its tangled web, the redback spider lies in wait.

She is a relative of the black widow; only the red dorsal stripe distinguishes them.

Redbacks are found everywhere throughout the Australian continent, especially alongside human habitation.

Only females build webs.  Their smaller, less brilliantly colored male counterparts often lurk to the side.

Females can live up to three years, males only for about 6 months.

When it comes to mating, males must approach cautiously-lest the object of their affections mistake them for a snack.

Humans, too, must be careful.  The spider won't seek out people to sting, but should a hand stray into her web by accident, a trip to the emergency room may be in order as the venom acts directly on the nerves.

Only the female bite is dangerous, and their bites have caused some human deaths.

The redback possesses a potent neurotoxic venom.  It does not hunt its prey, but instead waits for a tasty morsel to wander by and become entangled in its web.

Once the prey-usually a walking insect-becomes enmeshed in the redback's web, it's wrapped in silk.  When it's time to eat, the spider bites down on its intended victim, injecting its neurotoxic venom.  The venom paralyzes the insect, and digestive enzymes begin to dissolve the prey's insides. 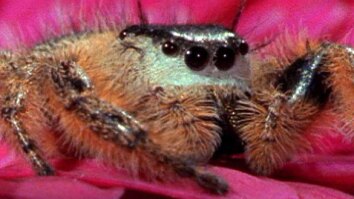 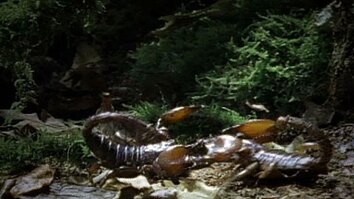