Transcript
For a lone grasshopper, this tree branch is fraught with danger.

Predators are everywhere, and one is especially formidable: the praying mantis.

Up to 6 inches long.

And a head that can turn 180 degrees.

But his chief weapon is camouflage.

The grasshopper doesn’t stand a chance.

Mantises can make short work of a long list of insects—moths, crickets, flies and even other mantises. Yes, even a mantis’s own mate is sometimes on the menu.

The big predatory bug is related to both termites and cockroaches…

Though no cockroach can blend in this well.

But the mantis isn’t the only predator lurking in the branches.

If he doesn’t watch out, a chameleon might make him its lunch. 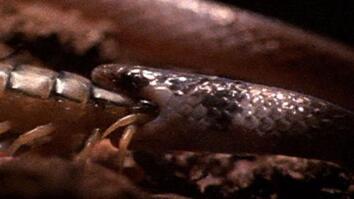 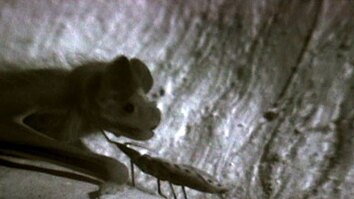 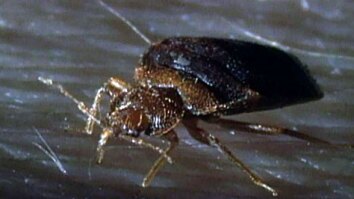 Bed Bugs
Cockroaches Are Everywhere
Giant Vacuum to Help Bugs in Oiled Marshes?
Body Farm
Butterfly Effects
World's Weirdest: Flies and Maggots
World's Weirdest: Smelly Fruit Fly Cologne
World's Weirdest: Larva Removed From a Girl's Scalp
Black Widow: Most Venomous Spider in North America
Salamander vs. Bugs
Photo Ark: Portraits of Wildlife Worth Saving
Weaver Ants...On the Menu
Mimicry: The Art of Deception Among Orchids
NG Live!: Iain Couzin: Lessons From a Cannibal Plague
NG Live!: Cannibal Bugs and Climate Battles
I Didn't Know That: Dust Mites
South American Centipede
The Mosquito
Raiding the Nest
Maggots
Mystery Diagnosis: Toxic Tick
Should We Eat More Bugs?
Enchanting Fireflies Paint the Sky
Fighting the Invasive Stinkbug
The Bugs That Decompose Bodies and Help Solve CSI Secrets
If You're Scared of Bugs, Don't Watch This
The Secret World of Dragonflies
Zombie Parasites
Gross or Brilliant? Using Bugs to Feed the Animals We Eat
Scientists Create Tiny Zones of Climate Change
Kids Learn Why Bees Are Awesome
What to do When There are Maggots in Your Eyeball
WATCH: Billions of Bugs Feast on Flesh and Dung in Borneo
Filming Glow-in-the-Dark Critters
TIL: A Bumblebee's Buzz Is Basically a Superpower
Beauty Through the Microscope: Bugs Like You’ve Never Seen Them Before
Why This Museum Stores Thousands of Dead Animals in Its Freezer
Puppies and Scientists Team Up Against Zika and Other Diseases
Watch: Fireflies Glowing in Sync to Attract Mates
Would You Risk Venomous Insect Stings for Your Job?
Amazing Time-Lapse of Blue Glowworms in New Zealand
Watch: Cockroach ‘Gives Birth’ While Being Devoured By Fire Ants
How to Train a Bumblebee: Scientists Study Insect Intelligence
Meet a Bizarre and Rare Beetle You’ve Never Seen Before
Watch a Delicate Dance Between Flowers and Insects
Fish Category:
Show More Videos
National Geographic
© 1996-2015 National Geographic Society.
© 2015-2020 National Geographic Partners, LLC.
All rights reserved.