The albatross has the biggest wingspan of any bird. But getting airborne takes some training ... and shark-infested waters demand a steep learning… more

This bird gives new meaning to the long-distance relationship.

With a wingspan of over ten feet, the albatross is the 747 of the bird world...and they're built for long-haul flights.

Albatrosses spend 70 percent of their lives on or over the ocean.

So when a couple gets together, they really have to make sure they're the one.

It's kind of an unusual date, but humans can recognize some of these moves.

They'll clap their beaks together until the pair's bond is formed.

And once it is, it's till death do they part-because albatrosses mate for life.

Each year, the female lays just one giant egg...which turns into one giant chick.

A chick with an insatiable appetite.

To feed it, each parent can make a round-trip journey of a thousand miles or more, just to provide a single meal.

That's a lot of frequent flier miles for a bit of regurgitated squid.

But all that love and care means nothing if that chick doesn't learn to fly.

Lessons are a little harsh.

The chick must develop its huge wing muscles and feathers before taking the leap...or the plunge.

It's a far cry from top gun.

But for these feathered students, the consequences for failure are just as deadly.

Though it's pretty good for the shark. 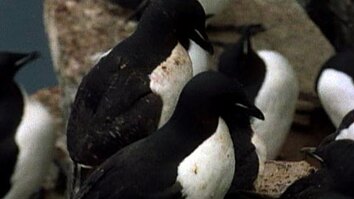 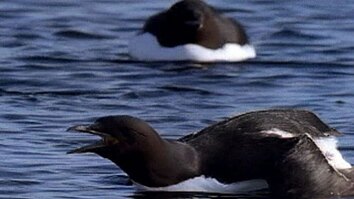