There are only three sharks that regularly attack humans: the massive great white, the swift, sleek tiger and the often-ignored but dangerous bull shark.

Mike Heithaus: “Probably get the name bull shark because they’re so big and stocky. I kind of think of them more as the pit bull of the seas.”

Bull sharks can be tenacious and aggressive.

They’re not as large as the great white, but female bulls can grow to over 11 feet and weigh up to 500 pounds.

They also have one very special characteristic:

Mike Heithaus: “One of the most amazing things about these bull sharks is that they go from marine to freshwater with no problems.”

Bulls have been found thousands of miles upstream in both the Mississippi and Amazon rivers.

They also are believed to hunt in the same shallow coastal waters where unsuspecting beachgoers frolic in the summer.

They are also opportunistic hunters… they’ll eat just about anything.

Mike wants to know more about bull sharks and their feeding habits so he’s attached Crittercams to the sharks – underwater cameras equipped with satellite tags.

The Crittercam reveals at least one other bull in the region, which raises the intriguing possibility that these sharks may be interacting.

It also suggests the bull shark may be a keystone species, which means they may be a critical influence on the structure of the ecosystem.

Satellite data also confirmed that the bulls stay put, never venturing far from where the team caught them…

That’s more proof that these animals may be an important part of the coastal environment.

But in regards to sharks and us, it showed that bulls do like to hunt and hang out in the same shallow waters we flock to every summer.

Ultimately though, it does us all good to remember that you are more likely to get struck by lightning, than bit by a shark.

Clams: Not Just for Chowder 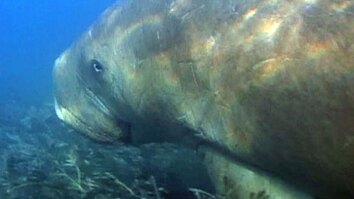